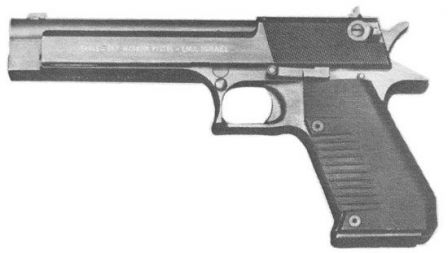 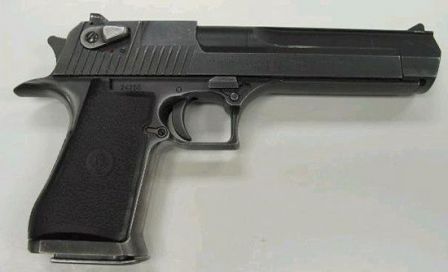 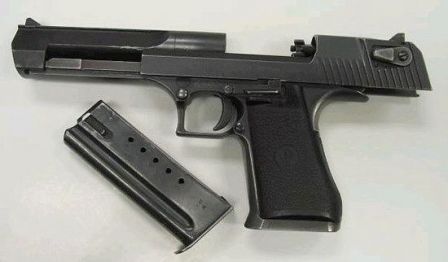 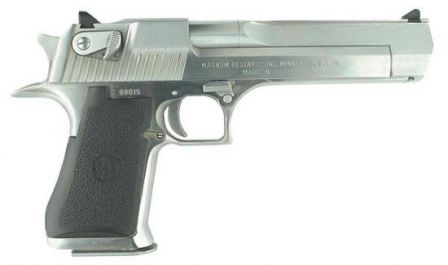 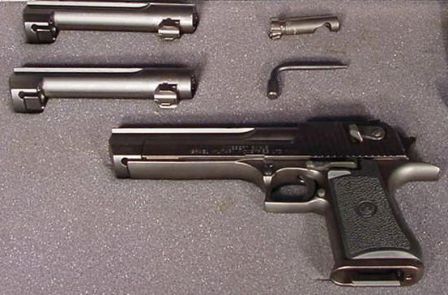 The Desert Eagle Pistol was conceived in 1979, when three people with an idea for creating a gas- operated, semi-automatic, magnum-caliber pistol founded Magnum Research, Inc. in St. Paul, Minnesota (USA). Early pistols, then known as Eagle 357, were announced in 1982

Magnum Research, Inc. patented the basic design of the Desert Eagle in 1980, and the first working prototype of the pistol was completed in 1981. It was about 80% functional, with a rotating bolt, full gas operation and excellent shooting characteristics. The final refinements to the pistol were made by Israel Military Industries (IMI), under contract to Magnum Research, Inc. After research that included thousands of rounds of test-firing, a fully functional .357 Magnum production model was produced in an edition of just over 1,000 pistols. These pistols, collector's items today, have traditional land-and-grove rifling, and they will not accept extended barrels or caliber conversion kits. The serial numbers for these pistols start at #3001.
Development of the Desert Eagle was not yet complete, however, in 1985, the barrel was changed to incorporate polygonal rifling, to help enhance the pistol's accuracy. In 1986, a .44 Magnum version of the pistol was perfected; it was the very first semi-automatic .44 Magnum pistol successfully brought to market.
Further enhancements to the Desert Eagle line continued. In 1987, the .41 Magnum Desert Eagle Pistol (not currently in production) was introduced to fill a specific market niche. In 1989, the Mark VII model of the Desert Eagle became standard. All Desert Eagle Pistols manufactured since 1989 have Mark VII features: enlarged safety levers, an enlarged slide release and an improved, two-stage trigger.
In around 1996, Magnum Research, Inc. successfully introduced the .50 Action Express Desert Eagle Pistol to fill an unmet need in the sporting/hunting market. Since Magnum Research introduced the caliber – once considered impossible to build – several other manufacturers have begun to produce .50 Magnum (a.k.a. .50 Action Express) firearms, but only one semiautomatic pistol design survived to date, and it is the Desert Eagle (there are few semi-custom or limited production revolvers and rifles made in this caliber as well). During the same period the basic design was upgraded to current Mark XIX specifications. Key improvement was the adoption of one frame size for all calibers (before that, mark I and Mark VII pistols had different frame sizes for different calibers). This unification allowed to use different barrels on same frame, permitting easy change of caliber with switch of only few components – barrel, magazine, and bolt (there are two nomenclatures of bolts used in Mark XIX pistols, one for smaller .357 Magnum ammo, and another for larger .44 Magnum and .50AE ammo; this is possible because .50AE case has rebated rim of the same diameter as .44 Magnum).
Today Desert eagle pistols are used for competition shooting (in disciplines like Silhouette shooting) as well as for hunting and general plinking (although the cost of gun and its ammunition makes it rather expensive fun gun). General belief of the Desert Eagle being used by various Special Operation forces so far found absolutely NO proofs. Indeed, for the price and weight of this empty gun one can easily have two pistols like Glock 17 or SIG-Sauer P228 plus good supply of ammunition; furthermore, these pistols will be much more reliable in severe combat conditions, and provide much bigger magazine capacity. Add to it severe recoil in its larger calibers (especially .50AE), huge muzzle blast and super-loud sound, and you'll see why only Hollywood warriors use this monster as a combat weapon. In real life, if you need a weapon more potent than a typical combat pistol (such as Glock or SIG-Sauer or Beretta or any other respectable model chambered for caliber between 9mm and .45ACP), you shall get either a rifle or submachine gun, period.
One last note – Magnum Research company, trying to capitalize on the fame of this pistol, also used Desert Eagle moniker to sell entirely different sidearm, the Jericho 941 pistol, also made in Israel by IMI. While Jericho looked like scaled-down Desert Eagle, in fact it is entirely different weapon inside, and, unlike its bigger brother, a truly useful combat weapon in its own right.

Desert Eagle is a gas operated, locked breech weapon that uses stationary (but removable) barrel. Locking is achieved using the separate rotating bolt with four radial lugs that enter the breech of the barrel for engagement with respective cuts. Bolt is inserted into open-topped slide, which is operated using gas, which is bled from the bore through the small port drilled close to the chamber. Short stroke gas piston is located below the barrel closer to the muzzle, and gas chamber is linked to the gas port with long channel, bored below the barrel. Trigger is of single action type, with exposed hammer and ambidextrous safety, located at either side of the slide. Magazines are single stack, with different configuration for each major caliber. Sights are either fixed or adjustable, both front and rear being dovetailed into the barrel and slide respectively. Recently made pistols also had top of the barrel shaped to accept scope rings directly.