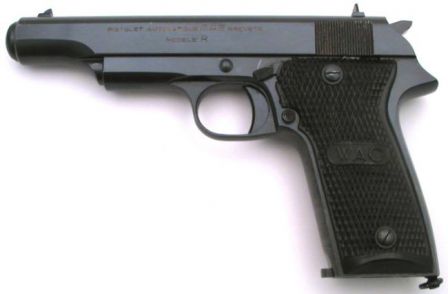 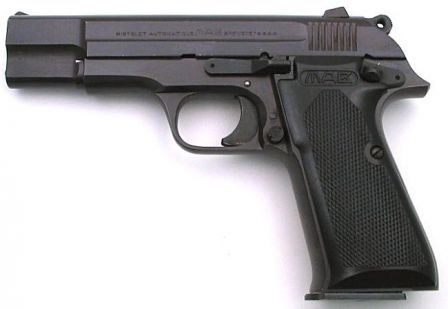 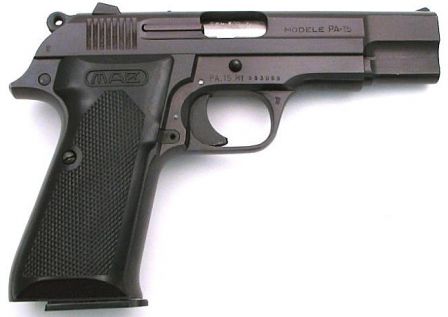 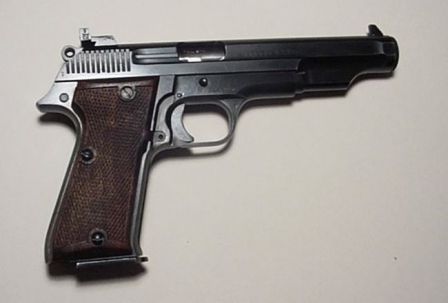 When, in late 1970s  production of the 9mm M1950 pistols ceased, the French army obtained small numbers of commercially available MAB P15 pistols, also in 9×19. These pistols were never adopted for general army service, but saw some use in the hands of French Naval Commando units, Military police and Marines. The long-barreled version of the P15 was used in very small numbers by the French army shooting teams under the designation of PAP F-1.
The MAB P15 pistol (also known as the PA-15, for Pistolet Automatique 15) was developed by the Manufacture d'Armes Automatiques de Bayonne (MAB) during the early 1970s based on the earlier 9×19 MAB Modele R Para pistol, which was originally created for the French army trials of late 1940s. The P15 saw minor use by the French military and was also widely exported for commercial sales. Production ceased in the late 1980s, and while there were rumors of this pistol being made in the former Yugoslavia, it seems that this venture never went past talks or experimenting. The P15 was a solid, accurate pistol with large magazine capacity and low felt recoil. Probably the only “drawback” of this system was its single action trigger, a slightly old-fashioned setup by the standards of the time.

The MAB P15 is a delayed-blowback pistol with a rotary barrel. It uses a variant of the Savage-Searle system, originally developed in the USA in 1905-07. The breech part of the barrel has two lugs, one at the top and one at the bottom. The lower lug is engaged in the perpendicular cut made in the frame insert, and allows the barrel to rotate but not recoil. The upper lug follows a curved track cut in the inner surface of the slide. When the gun is fired, the pressure of the propellant gas forces the cartridge case back against the slide. The recoil of the slide, via the cam track, forces the barrel to rotate to the right; at the initial stages of the shot, when the bullet is still in the barrel and pressure is high, the rotation of the barrel and, subsequently, the opening of the slide, are opposed by the inertia of the barrel plus torque created by the bullet following the rifling. As soon as bullet leaves the barrel, the torque force disappears and the slide forces barrel to rotate all the way through the cam arc. There’s a straight cut in the slide which then allows it to go back without any further resistance from the barrel. The trigger is single-action, with an external hammer and a manual, frame mounted safety. There is also an automatic magazine safety. Magazines are of double stack design, and hold 15 rounds. Sights are fixed, with the rear being dovetailed to the slide. Manual safety was a lever at the left side of the frame, above the grip panel. To put on safety, push the lever up; to set to “Fire”, pull the lever down

How to disassemble MAB PA-15 pistol: 1) remove the magazine by pressing the magazine release button; 2) check that the chamber is empty; 3) cock the hammer 4) pull the slide rearward for about 6mm (1/4 of an inch), to align the rear end of a slide stop with the disassembly notch in the slide; 5) pus the slide stop pin inwards from the right, and then pull it out completely from the left; 6) pull the slide forward and out of the frame; 7) turn the slide upside down, and push the base of return spring guide slightly forward, and then pull it up at out of the slide; 8) move the barrel forward until it completes its rotation in the slide (about 8mm), then pull it out of the slide.
Reassemble in reverse order.