The anti-tank rifle was born during the late stages of the Great War (WW1), when German troops faced the newest British invention, the tank. This armored vehicle was purpose built to travel through the battlefield with its natural and artifical obstacles like shell holes and barbed wire, and to withstand small arms fire from infantry machine guns and rifles. Of cause, these tanks were vulnerable to artillery fire, but lack of proper communications and impossibility of getting a field cannon to every trehcn, resulted in requirements for relatively compact and inexpensive weapons, capable of penetration of tank hulls. Since the Germans were the first to see the "business ends" of British tanks, they also were the first to develop a practical weapon to fight the tanks – the Tank-abwehr-gewer (anti-tank rifle), which is commonly known as Mauser T-Gewehr. This weapon basically was nothing more than conventional rifle, enlarged to fire specially designed 13mm ammunition, which was capable of penetrating typical armor of contemporary british tanks (with thickness about 12 mm / .5") and then cause at least some damage to the crew or equipment. The T-Gewehr set the pattern for most weapons of this class. These generally included rifle-like layout combined with significal size (usually between 1.5 and 2 meters, sometimes longer), heavy weight and noticeable (if not punishing) recoil, generated by large-caliber cartridge firing specially designed armor piercing (AP) bullet. Usually, such projectiles were able to penetrate about 20 to 300 mm of steel armor at range of 100 meters, which was well enough to deal with most tanks of pre WW2 era. Typical calibers for antitank rifles ran between 12.7 and 15mm, although there were two other schools of thoughts in anti-tank rifle development.


The second school of thoughts favored rifle-caliber bullets, fired at very high velocities (1100 to 1200 m/s). Use of relatively light bullets (12 – 14 gram compared to 50-60 gram bullets in 13-15mm calibers) allowed to build lighter rifles with less punishing recoil. On the other hand, high velocities nesessated use of seriously "over bore" cartridges, which resulted in rapid bore erosion. The actual damage, done to the tank by such small projectiles, also let a lot to be desired. Rifles of this type found some favor among Polish  and German military cicrcles prior to and early in WW2.

Another, third school favored bigger and heavier projectiles of caliber about 20 mm. Caliber that big (by rifle standsrds) allowed for use of various types of munitions, including AP, Incendiary, High Explosive etc, making such rifles more versatile as infantry support weapons. The cost of this versatility was heavy weight of the rifle (usually between 40 and 60 kg) and ammunition, extremely heavy recoil, high costs of the guns and ammunition. And in the end, the penetration of the 20mm anti-tank rifles still was about 30-35mm at its best. Considering the fact that by 1942 most tanks had armor thicker than that (Soviet T-34 had armor 45/45mm (front/side) thick, US M4 Sherman – 51/38mm, German TIII – 30-50mm and TIV – 80/30mm) by the 1942 most anti-tank rifles became ineffective against medium and heavy tanks of all sides of conflict. Still, many countrues used available anti-tank rifles until the end of the war, against light armor (light tanks, armored cars and personnel carriers), pillboxes, light entrenchments etc. Many 20mm anti-tank rifles also were used as infantry support weapons, when firing HE or HE-FRAG ammunition.

Development of the shaped charge (HEAT) warheads and anti-tank grenade and rocket launchers, which became operational during the second half of WW2, finally made anti-tank rifles obsolete. However, several decates later similar weapons began to appear in the military stocks again, this time as anti-materiel and long range sniper rifles. In fact, earliest attempts in long-range sniping using large caliber ammunition were made using old, WW2 era anti-tank rifles fitted with optical sights.

For those further interested in ammunition for anti-tank rifles, I recommend to read the article An Introduction to Anti-Tank Rifle Cartridges by Anthony Williams (link will open in new window)

One final note must be made regarding penetration figures, shown here. Please take note that different countries and at different times had different procedures of measuring the armor penetration, which, among other things, mean that different types of armor and projectiles were used. Therefore, listed figures must be used with caution. 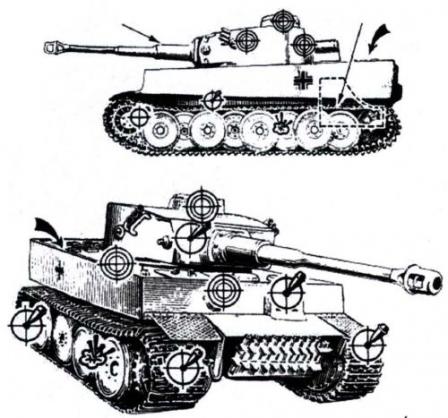 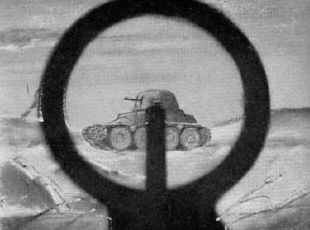