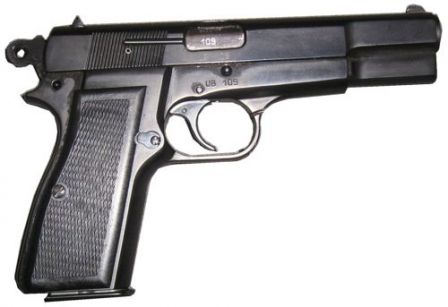 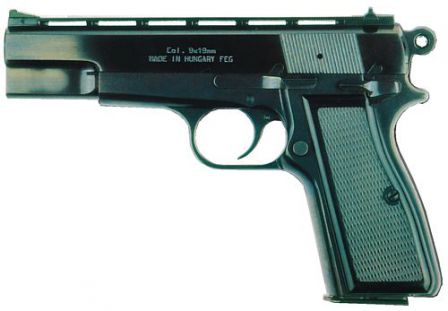 FEG FP9 pistol; the only difference from P9M is the ventilated rib at the top of the slide.

P9M and FP9 pistols are made by Hungarian FEG company (originally known as Fegyver es Gazkeszuelekgyara NV, now FEGARMY Arms factory, Ltd.). These pistols were also exported under designations of PJK-9HP. In Europe, FEG FP9 guns were also marketed under the name of Mauser, as the Mauser 80SA pistols. The only difference between the P9M and FP9 is the ventilated rib at the top of the slide on FP9, otherwise guns are identical. The P9M is almost exact copy of the famous Belgian High Power (also known as HP or GP-35) pistol. In fact, GP-35 and P9M are so similar that many parts are interchangeable between them. These pistols were not used as a service guns in the Hungary, and were intended for export. Some guns were used by the Lithuanian police, and probably these guns were used somewhere else.

The P9M is a short recoil operated, locked breech pistol. The barrel is operated using a Browning cam system, and is locked to slide by three locking lugs on the top of the barrel, which fit into mated recesses on the inside of the slide, just ahead of the ejection port. Frame and slide are made from carbon steel and usually have blued finish. Single Action trigger system with external hammer is copied from FN GP-35, the only difference is in the shape and dimensions of the frame mounted safety lever, which is longer than the original GP-35 safety lever. The magazines also are interchangeable between FN GP-35 and FEG P9M.