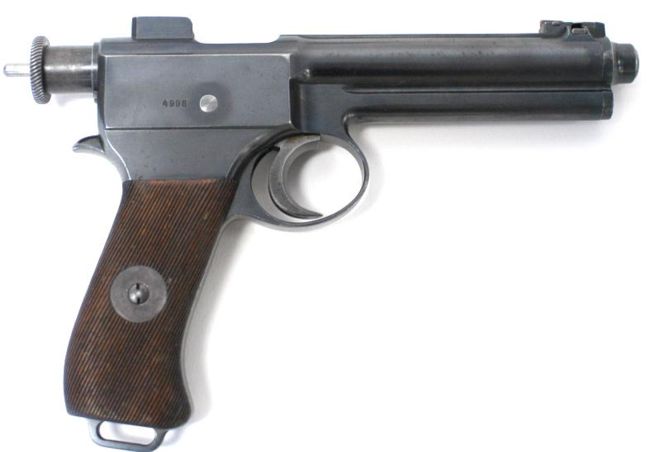 Roth-Steyr Model 1907 self-loading pistol, right side. The thin tail of the striker, which extends out of the rear of the bolt, means that the gun is half-cocked and ready to be fired. 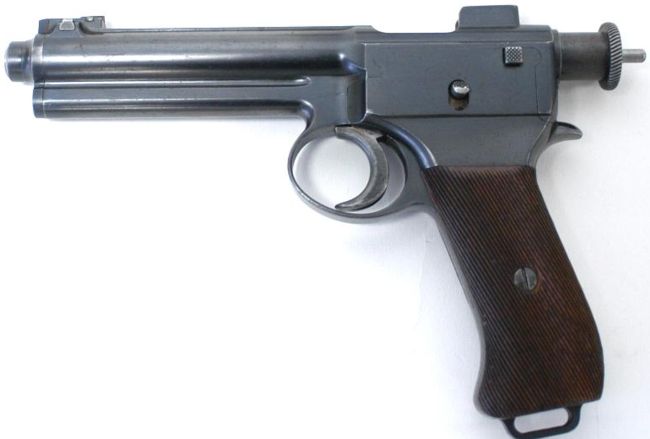 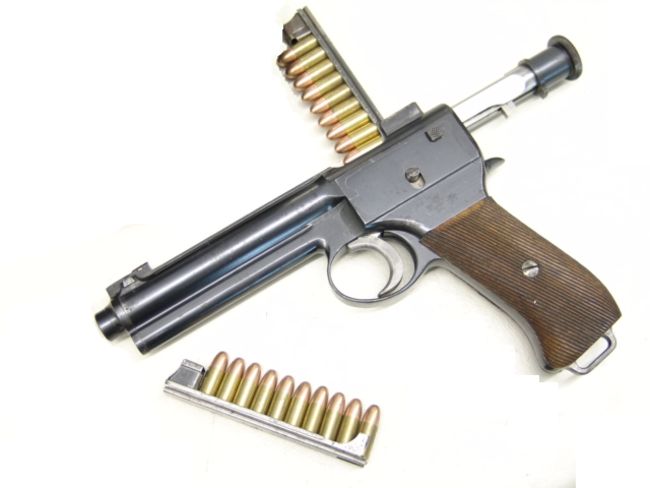 Roth-Steyr Model 1907 self-loading pistol; bolt is locked back, and a loaded clip is inserted into the gun, ready to load the magazine.

The Roth-Steyr Model 1907 pistol (Also designated Roth-Krnka M.7)  bears the distinction of being the first ever semi-automatic or self-loading pistol adopted by any major military force, worldwide.

In this particular case, it was the cavalry of the Austro-Hungarian Empire. The pistol was based on the patents of the famous Austro-Hungarian gun designers Georg Roth and Karel (Charles) Krnka. Karel Krnka was from what is now known as the Czech Republic, at that time a part of Austro-Hungary. This pistol was manufactured between 1907 and 1918, and some 90 000 Roth-Steyr M.07 pistols were made at Steyr and FEG arms factories.

The Roth-Steyr Model 1907 pistol uses short recoil action with a rotary barrel. The barrel has two sets of radial lugs, each consisting of two lugs. The front pair of lugs, which is located near the barrel, follows the cam tracks cut in the stationary barrel bushing, thus forcing the barrel to rotate upon recoil.

The rear set of lugs locks the barrel to the forward bolt extension when the barrel is in forward position. Upon recoil, the barrel rotates and the rear lugs leave their mortises in the bolt extension, unlocking the bolt and allowing it to recoil freely to complete the operating cycle. The feed is from an integral box magazine located inside the grip.

Integral magazines are loaded from special stripper clips that are inserted into the ejection port at the top of the gun. Once the clip is inserted, the shooter presses the cartridges from the clip into the magazine, then removes the empty clip and presses the bolt release button, to close the bolt and make the pistol ready to fire.

The trigger of the Roth M.07 pistol was of quite advanced design for the times. The gun was striker-fired, and the striker was only partially cocked after each shot. To complete the cocking and then release the striker, the shooter had to pull the trigger all the way back. Since the integral magazine was loaded from the top, the pistol had a special ‘magazine release button’, which allowed the unloading of all the cartridges in the magazine at once, once the bolt is manually locked back.