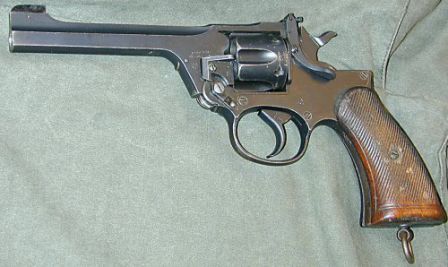 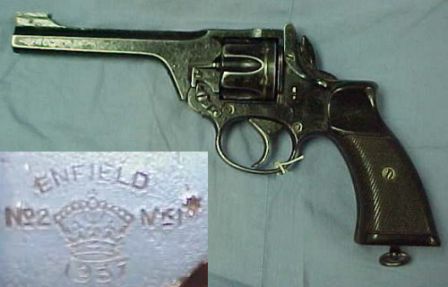 The Enfield No. 2 Mark 1 revolver was developed at the Royal Small Arms Factory in Enfield, England from 1926 – 1927. The design is based on a scaled down Webley Mark 6 “top-break” frame, with cylinder chambered for 6 .38/200 rounds.

The hammer/trigger group was redesigned, with a manual hammer safety lock added, and with a separate cylinder lock. This revolver was adopted for British Military service in 1932 as ‘Enfield Revolver, .38 Calibre, No.2 Mark 1’. After 1938, almost all No.2 Mk.1’s were converted into ‘No.2 Mark 1*’ configuration [not the author’s asterix].

Enfield No.2 Mark 1* was developed in the late 1930’s for the British Tank Corps, and are distinguished from the early Mark 1 by spurless, Double Action Only hammers, lighter mainsprings, and re-shaped grip side plates. The spurless DAO hammers were required by Tank Corps command to avoid snagging the hammers on tank internals.

‘Enfield No.2 Mark 1**’ appeared in 1942 as a simplified, wartime design. These guns were similar to No.2 Mark 1*, but without the hammer stop. After 1945, all of these revolvers were recalled and converted into No.2 Mark 1* configuration.