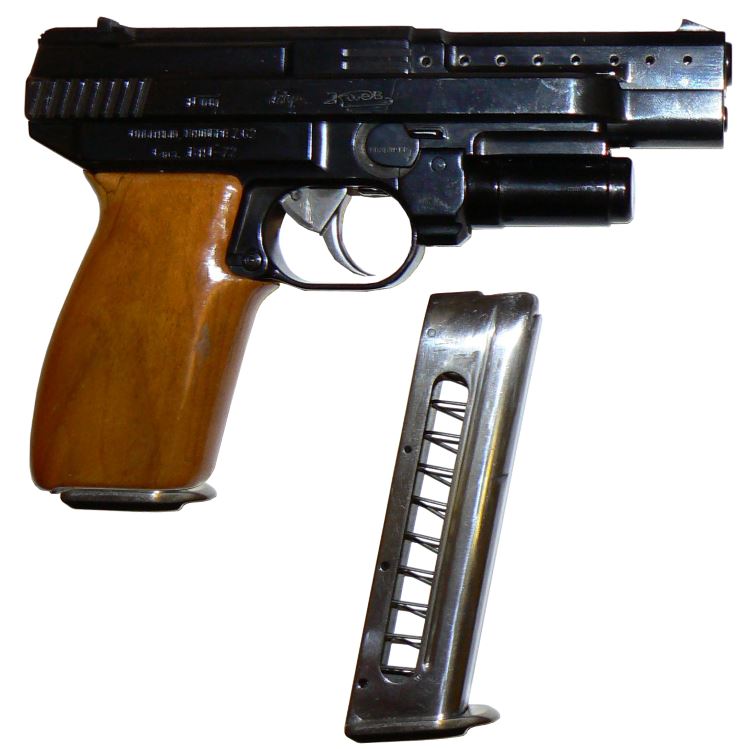 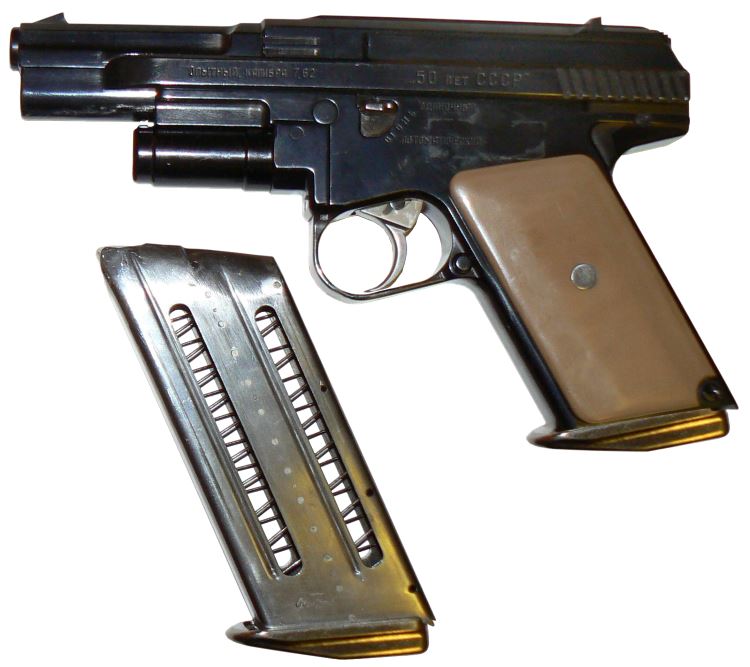 7.62mm round of ammunition, designed by Gerasimenko. Projectile is all-steel, except for screw-in base made of brass, and is hollow at the rear (where propellant  is stored)

Those very unusual experimental pistols were developed during early 1970s by Vladimir Gerasimenko. He worked at one of industrial factories in the city of Kiev (USSR, now Ukraine), and designed small arms in his spare time, which in itself was not a typical hobby during Soviet times, but he somehow found an approval from local KGB authorities. The VAG-72 pistol, produced around 1972, was a semi-automatic weapon firing unusual “caseless” ammunition similar in concept to Italian 9mm AUPO cartridges (or much earlier “Volcanic volition ball” ammunition from 19th century). 7.62mm ammunition, designed by Gerasimenko, featured machines steel projectiles with ogive nose and hollow cylindrical body open at the rear. Hollow cavity inside the projectile contained propellant charge of smokeless powder; it was closed at the rear by a screw-in brass base that served as a driving band to engage rifling and also contained a combustible primer. Upon discharge, primer burned through to ignite the powder charge, and powder gases emerged rearwards to push the bullet out of the bore through the large primer hole in the base. In 1973, Gerasimenko designed another, larger pistol to fire same type of ammunition. Known as VAG-73, it featured high capacity, tandem type magazine, and had select-fire capabilities. It is believed that only one of each type of Gerasimenko pistol, and a handful of 7.62mm rounds survived to this day in the collection of Artillery museum in St.Petersburg, Russia. Obviously, the entire concept of the cartridge with propellant container (case) integral to the projectile (bullet) was generally flawed and offered no practical benefits over conventional ammunition, while adding additional problems of obturation, reliable headspacing and excessive fouling of the gun internals. Therefore, these pistols are no more than a historical curiosity and oddity in Soviet history of small arms development, dominated by huge, state-owned factories and scientific R&D institutions.

Gerasimenko VAG-73 pistol is a select-fire weapon that utilizes simple blowback action and a pneumatic slide buffer to decrease cyclic rate of fire. The barrel chamber is noticeably deeper than the cartridge itself, and the breech face of the bolt inside the slide is round to enter the rear part of the chamber, thus achieving necessary obturation (gas seal), mandated by a “caseless” cartridge with opening at the rear. Dual stack, dual compartment tandem magazine holds 48 rounds in total; when firing, special projections at the bottom of the slide force topmost cartridges in each magazine compartment forward; top cartridge from the forward compartment goes into the barrel, and the top cartridge in the rear compartment moves forward into the front compartment, taking place of the chambered round. Therefore, rear compartment of the magazine is expended first; once the rear compartment is ready, cartridges from the front compartment are fed into the barrel in the usual way. Being an experimental weapon, VAG-73 pistol has no manual safeties; an ambidextrous fire mode selector switch is located at both sides of the frame, roughly above the trigger. VAG-72 semi-automatic pistol was more or less similar design, but it featured single-compartment, double stack magazine with 24-round capacity, no pneumatic buffer and no fire mode selector.