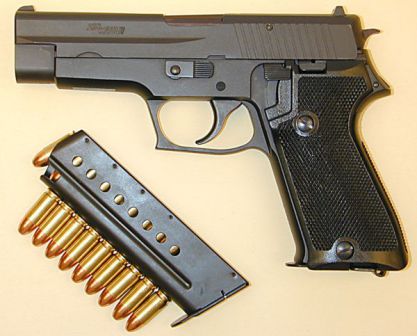 Early SIG-Sauer P220 pistol in 9mm. It is same as Swiss service Pistole 75, and has a bottom magazine release. 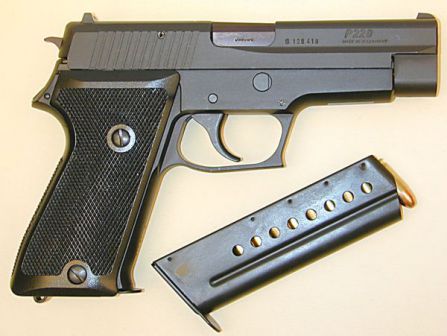 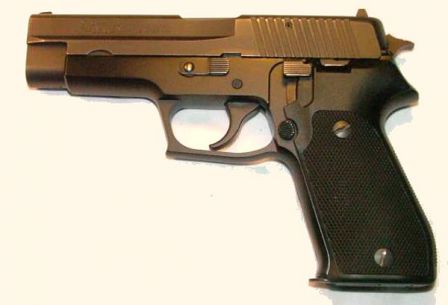 SIG-Sauer P220 pistol in .45ACP, with “American” style magazine release at the left side of the grip. 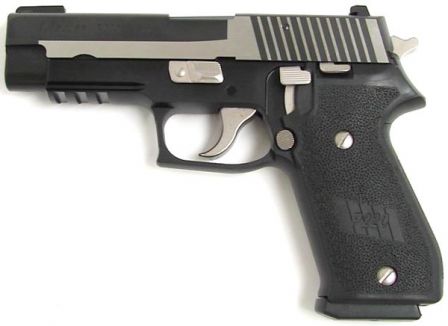 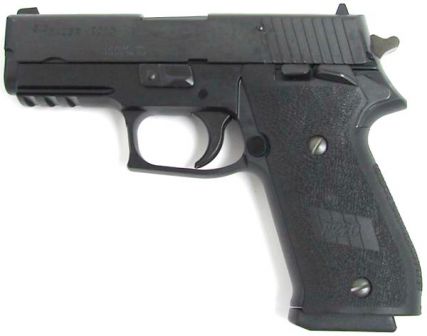 The most recent version of the .45 caliber P220, with Single Action trigger and ambidextrous frame mounted safety; the version shown is the P220R carry SAO, with shortened barrel and accessory rail. 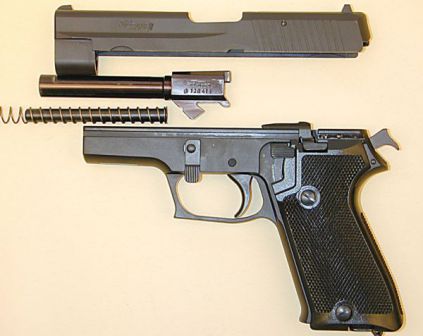 The SIG-Sauer P220 is often considered to be the best “out of the box” .45 caliber double action pistol ever made. It started its life as the 9mm Pistole 75, a double action sidearm introduced for the Swiss army.

Developed during the early 1970’s by the famous Swiss company Sweizerishe Industrie-Gesellschaft or SIG for short, this pistol was intended to replace the extremely accurate, but overly expensive SIG P210 pistol. The 210 was then in service with the Swiss Army and with some other countries.

The P220 was indeed a very promising design, but the laws in Switzerland were strict, in accordance with their long held military neutrality. This legislation severely limited the export of war materiel. So SIG decided to move the manufacture of its newest pistol abroad. For this reason SIG Holdings AG in 1976 acquired significant stocks of the J.P. Sauer & Son Company, which was located in Germany. During the late 1970’s the manufacture of the SIG-Sauer P220 pistol was begun in Germany.

The P220, as with most of its later siblings, (such as the P228 and P229 among others), was an instant and continuous success. Adopted initially by the Swiss and Japanese armies, it was also taken up by a large number of European police organizations. This pistol rapidly found its way into the USA, firstly imported through the Browning Arms Company of Utah as the ‘Browning BDA’ and since the mid-1980’s, through the SIGARMS Company of New Hampshire. SIGARMS changed its name to SIG SAUER in 2007 and now manufactures firearms in the United States.

Initially made in four calibers, today the P220 is only manufactured in .45 ACP. Its 9mm version has been largely replaced by the SIG-Sauer P226. The P226 is of similar size but with a larger magazine capacity (8 rounds instead of only 7 in .45 ACP).

Today the P220 is made in a number of versions which include both “service” and “sporting” modifications. The latter is often fitted with extended barrels, compensators and adjustable sights. Service versions may have a Picatinny rail for accessories, as well as double-action or double-action-only triggers.

Since 2006, the P220 is also offered with Single action triggers and in “Carry” configuration with a shortened barrel. The P220 also comes with an aluminium frame and steel slide, or with both frame and slide made from stainless steel.

It’s worth noting that a high-capacity version of the .45 caliber P220 was developed during the early 1990’s for the US market. Apparently designated P221, this gun was effectively killed by the so-called “Assault weapons ban”, the infamous US legislation that limited the magazine capacity of civilian arms to 10 rounds, enforced in the USA between 1994 and 2004.

The SIG-Sauer P220 is a short-recoil operated, locked-breech pistol. The locking is of modified Browning type, where the barrel engages the slide with single large lug entering the ejection window. The unlocking is controlled by a cam-shaped lug under the barrel, which interacts with the steel insert set into the aluminium frame.

The slide is made from sheet steel by stamping and forming processes, with the separate breechblock pinned into the rear of the slide. Machined slides are available on some current production .45 caliber models. The standard trigger is a double-action type, with an automatic firing pin block safety and a frame-mounted de-cocking lever.

Double action only modifications do not have a decocker. Most recent SAO (Single action only) versions have ambidextrous non-decocking safeties located on the frame, which allow for “Cocked & Locked” carry. Perhaps the most prized feature of the P220 and others in the range is that the de-cocking lever allows the pistol to be carried with a round in the chamber, potentially saving time in a life or death encounter.

Magazines are single stack, with the magazine release located on the heel of the grip on early  versions, or at the base of the trigger-guard on the .45 caliber versions made for the US market. The standard sights are fixed, with high contrast inserts, and the rear sight is dovetailed to the slide.