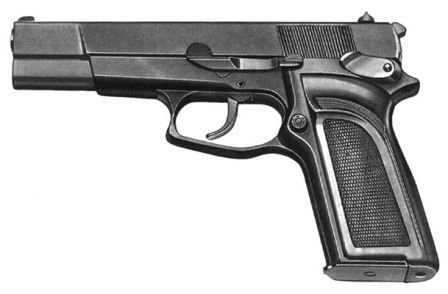 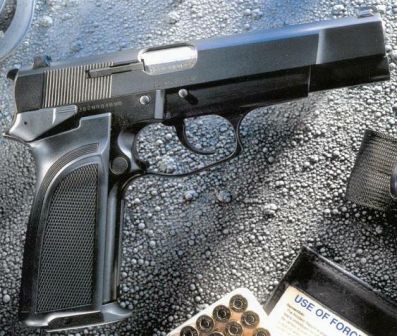 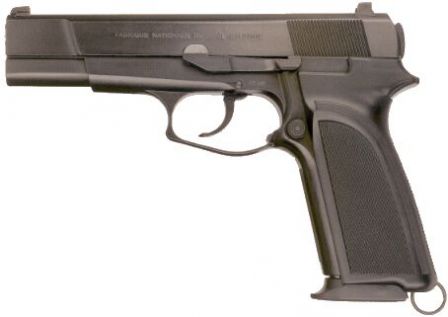 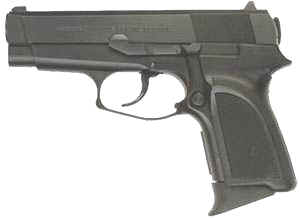 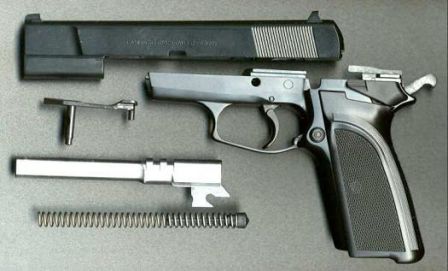 First appearing in 1983, the new pistol was called the Browning Double Action (for the North American market) or FN HP-DA (for the European market). Having similar construction and general outlines to the older High Power pistol, the new gun differed from it in some important ways. First of all, it has a Double Action trigger with ambidextrous, frame mounted decocker lever instead of a manual safety. The hammer spur was decreased in size, and triggerguard reshaped for a better two-handed hold. The slide also had slightly different contours on the front.

Magazine capacity was increased by 1 round, so that it held 14 rounds plus one in the chamber. Along with the standard version FN developed a Compact (HP-DAC) and Medium (HP-DAM) versions of the basic design. The compact pistol had a shortened barrel, slide and grip, which held a shortened, dual-stack magazine with 7 rounds.

Standard, 14 round double-stack magazines also fit the compact model. The Medium model was a hybrid of the Standard model frame and Compact barrel and slide. Due to various reasons, neither model sold well and FN discontinued this line circa 1987.

Later, in 1990, FN decided to bring the Double Action High Powers back to life. Using new manufacturing processes and a redesigned DA trigger, FN engineers produced new variations. These were named ‘Browning BDA9’ and BDAO (for the US market) or FN HP-DA and HP-DAO (for the European market). The BDA9/HP-DA differed from the earlier HP-DA very little. The obvious change is in the decocking lever – the newer guns had longer, triangle-shaped levers for better manipulation and control.

The BDAO / HP-DAO is a further step towards modern trends and is a Double Action Only gun, without any manual safeties or decocking lever.

Unlike the original HP-DAs, newest models found its niche on European military and police market, and also sold in USA.

Technically, HP-DA / BDA9 is a recoil operated, locked breech semiautomatic pistol. It uses a Browning style cam to interlock barrel and slide. Trigger is of double action type with either ambidextrous decocker and internal firing pin safety or double action only type with firing pin safety only. An additional safety prevents the pistol from firing if the slide is not closed completely. The basic design featured fixed sights, dovetailed into the slide. The magazine is double-stack and holds 14 rounds, with the possibility to leave one extra in the chamber. A magazine release button is located behind the triggerguard and can be installed on either side of the gun by the user.

In general, the HP-DA / BDA9 pistol represents, in my view, a slightly conservative, but still sound approach to a combat pistol. It offers good firepower, solid reliability and a satisfactory safety level.