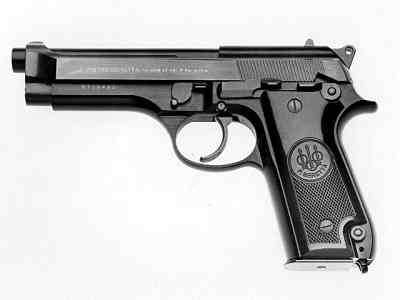 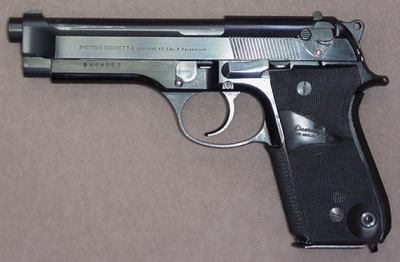 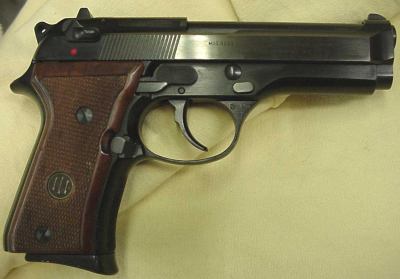 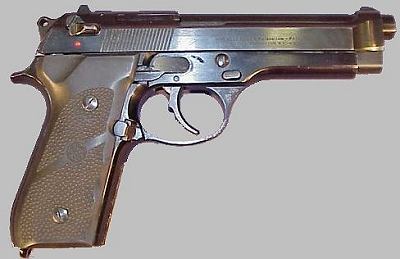 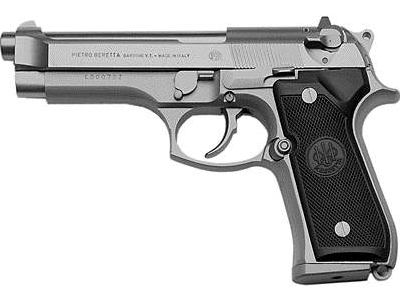 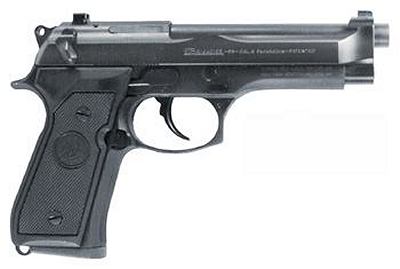 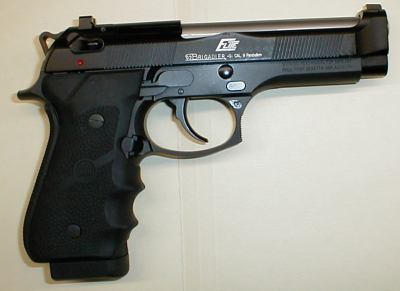 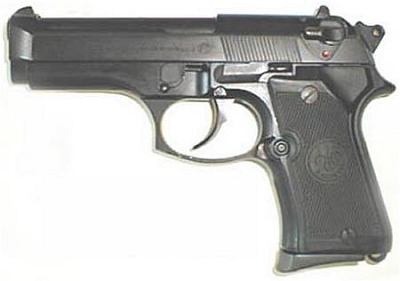 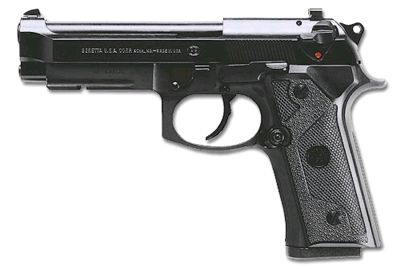 Beretta 92 Vertec with modified grip and integral accessory rail under the barrel. 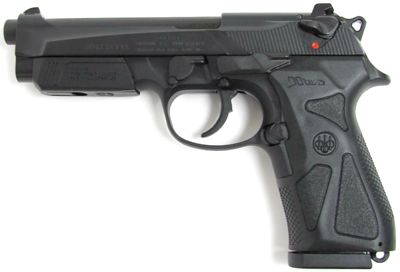 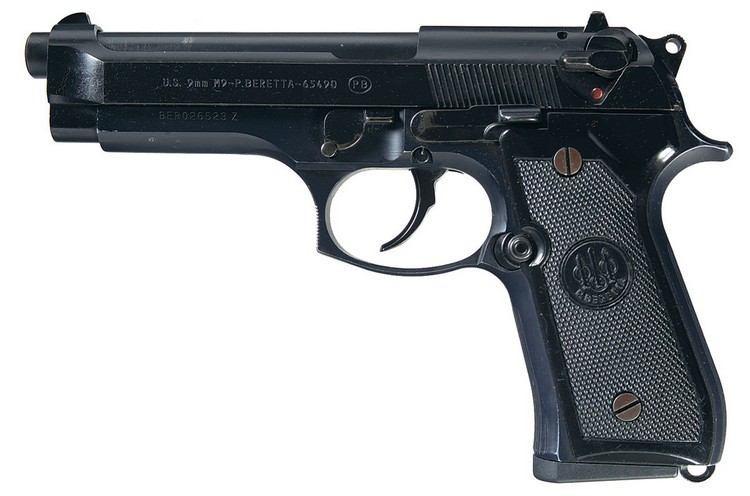 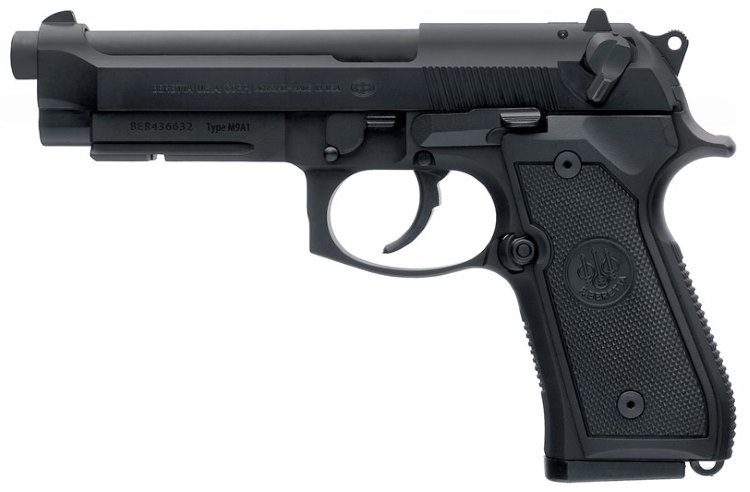 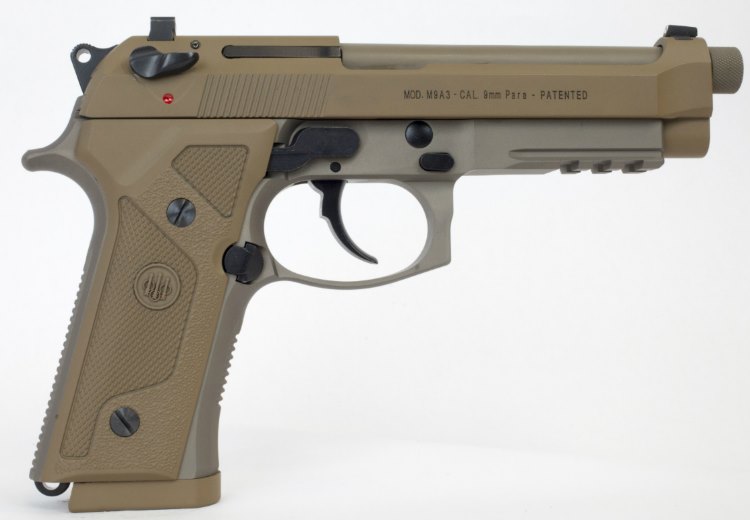 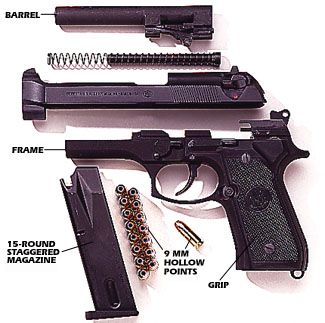 Originally designed for the Italian army and police, the Model 92 pistols earned most of their fame (both good and bad) as the standard sidearm of the US military. It was developed between 1970 and 1975 as a possible replacement for ageing Beretta M951 pistol, and entered production in Italy in 1976.
First adopted by the Brazilian army in 1977, this pistol was later adopted in Italy in its Model 92S, “SB”, and finally “F” modifications. The US military adopted the Model 92SB-F (later renamed to model 92F) in 1985, as a result of the highly controversial XM9 trials. In the late 1980s and 1990s, these pistols were also adopted in France. It must be noted that, while being entirely adequate as a combat pistol, the Beretta 92 is somewhat bulky for its caliber and magazine capacity, thus less suitable for users with average or smaller hands. Other than the basic 9mm, Beretta also makes these pistols in other calibers, such as .40 S&W (model 96) and 9×21 IMI (Model 98, available for civilian users in certain European countries, including Italy). Beretta also makes a wide variety of models based on the same design; these include not only variations in finishes and sights, but also different trigger types (DA/SA, DA/SA with decock only, DAO, DAO with manual safety).

Beretta 92 pistols are short-recoil operated, locked-breech weapons with an aluminium frame. The locking system is of the Walther type, with a vertically-tilting locking piece located below the breech area of the barrel. The trigger is double-action, with an exposed hammer. Original Model 92 pistols had a frame-mounted safety which was applied only when hammer was cocked; all subsequent pistols (except for some limited production civilian-only sporting models) either had a slide-mounted safety lever or no safety lever at all. On some pistols, such as the Model 92G adopted in France, the levers do not lock themselves in the lowered position but return to the “fire” position once released – their function is limited only to safe decocking of the hammer. Some other models, such as the Model 92D, are double-action-only pistols with no manual safety or decocker. All pistols of current production are fitted with an automatic firing pin block safety. Magazines are double stack, with the magazine release button located in the base of the trigger-guard on all 92-series pistols made since 1981. Sights on service models are of fixed type, with a dovetailed rear blade, usually with high-contrast inserts.
With the introduction of the Model 92FS in the late 1980s, another unusual safety feature was fitted in the form of an enlarged head to the hammer pin. The purpose of this safety is to prevent the rear of the slide from flying back into the firer’s face in the case of the slide failure. This happened several times during the earlier years of Model 92F service in US military, apparently because of metallurgical problems, combined with the “built-in” weak points in the slide where the locking block cuts are made. Recognizing these weak points, the US INS (Immigration and Naturalization Service) requested Beretta to make their model 96 (.40 S&W caliber version of Model 92) with reinforced slides. This resulted in appearance of the Model 96 Brigadier pistols, and, later on, the same modification was applied to 9mm pistols, available as Model 92 Brigadier. Beretta also produced a number of compact versions of their basic, full-size Model 92 variations. These compact versions had shortened grips, slides and barrels; Compact Type M versions also featured single-stack magazines with appropriately thinned grips. At the present time, Beretta no longer makes Compact versions of the Model 92; in the firm's product line these were replaced by the entirely different Model 8000 Cougar pistols.

Below is a brief list of most important modifications and versions produced in the 92-series over last 30 years.
Beretta 92S (1976) – first modification of the basic model 92, with non-ambidextrous slide-mounted safety/decocker and magazine release button set low in the left grip panel. It was replaced in production by the Model 92SB.
Beretta 92SB (1981) – further evolution of model 92S, initially designated Model 92S-1, later designated 92SB with the introduction of the firing pin block. The manual safety is ambidextrous, the magazine release relocated to the base of the trigger-guard. Discontinued since 1991.
Beretta 92SB-C (1981) – Compact version of the model 92SB. Overall length was 197 mm, barrel length 103 mm, magazine capacity 13 rounds (also accepted standard 15-round magazines).
Beretta 92SB-C type M (1983) – slimmer version of the model 92SB-C, with a single-stack magazine which held only 8 rounds.
Beretta 92F (1984) – initially designated 92SB-F, later renamed 92F. Evolved from the Model 92SB during American XM9 trials, with a slightly reshaped grip and trigger-guard, also a different finish. The barrel bore and chamber are chrome-plated.
Beretta 92G (1989)- the so called "Gendarmerie" version, created at the request of the Gendarmerie Nationale de France. Also manufactured under licence in France by GIAT Industries as the PA MAS G1. The pistol is the same as the model 92F except for the operations of the lever, which lost its safety lock function and is used only to safely decock the hammer.
Beretta 92FS (1989) – a minor modification of the Model 92F, with an enlarged hammer pin head which prevents the slide from flying back in the case of breakage. Presently, all US M9 pistols are modified to 92FS standard.
Beretta 92FS-C (1989) – compact version of the Model 92FS, similar in dimensions to earlier model 92SB-C. No longer made.
Beretta 92FS-C type M (1989) – single-stack version of Model 92FS-C, magazine capacity 8 rounds. No longer made.
Beretta 92DS (1990) – Double Action Only version of the Model 92FS, with spurless hammer and manual safety.
Beretta 92D (1990) Double Action Only version of the Model 92FS, with spurless hammer and no manual safety levers.
Beretta 92FS Brigadier (1996) – version of the Model 92FS with a reinforced, thickened slide; another change is that the front sight is not integral to the slide, but is dovetailed into it
Beretta 92FS Centurion (1996) – version of the Model 92FS with a shortened barrel and slide, the frame is the same as on the Model 92FS. Overall length is 197 mm, barrel length is 103 mm, magazine capacity 15 rounds.
Beretta 92 Vertec (2003) – version of the Model 92FS that addressed constant complaints about the excessive grip width of Model 92 pistols. The backstrap of the grip on Vertec models is made more linear; another change is the addition of an integral Picatinny rail to the frame.
Beretta 90two (2006) – a face-lift version of the basic Model 92 design. Key changes are modular one-piece grip panels (available in various shapes), integral Picatinny rail under the barrel (with cover), restyled slide and integral recoil buffer built into action.
Beretta M9A1: a recent attempt of Beretta USA to replace ageing M9 pistols with a slightly more modern version which features integrated Mil-Std 1913 (Picatinny) rail under the barrel and some minor enhancements. Not adopted despite its "military-looking" name.
Beretta M9A3: another recent military-type pistol which is intended to replace M9. Features removable front sight, thinner Vertec-style grip, slightly extended threaded barrel that can accept a sound suppressor, and few other improvements. Not (yet) adopted by US military.

How to field-strip (disassemble) Beretta 92 pistol: 1) remove the magazine by pressing the magazine release button; 2) check that the chamber is empty; 3) pull the slide all the way back and lock it with the slide stop lever; 4) depress the takedown lever stop, which is the small button located of the left frame above the trigger guard; 5) while holding the button down, rotate the takedown lever (located at the right side of the frame) downward about 90o ; 6) pull the slide slightly back to disengage the slide stop, then carefully push it all the way forward and out of the frame; 7) remove the return spring by pushing its head slightly forward and then pulling it out of the detent in the barrel; 8) push the locking lever pin (protrudes backwards from below the barrel breech area), then lift up the barrel from the slide.
Reassemble in reverse order.