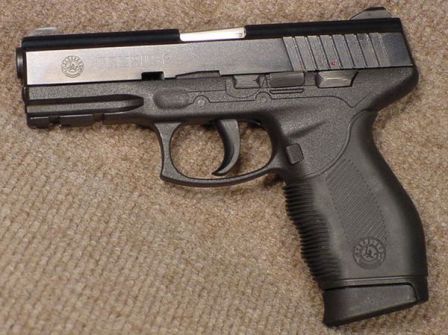 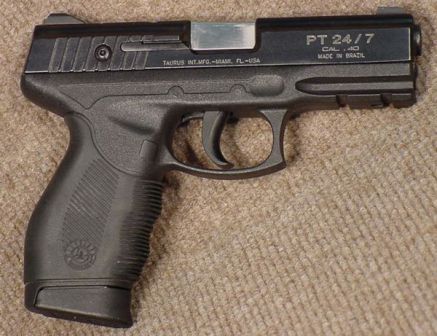 The Taurus 24/7 Pistol was first presented in 2004. It’s an attempt to offer a new, lightweight, potent pistol for Brazilian security forces and civilian use. These pistols were available in a variety of the major calibers, and with a number of finishing options to customize its appearance. Early pistols were Double Action Only. Recently Taurus introduced conventional Double / Single action 24/7 pistols.

The Taurus 24/7 pistol is a short recoil operated, locked breech pistol using modified Browning-type locking, with a single lug on the barrel to engage the ejection port in the slide. The frame of the Taurus 24/7 pistol is made from impact-resistant polymer. The slide can be made from carbon or stainless steel. Trigger is either double / single action or  double action only. They are striker-fired, with internal firing pin block safety and manual safety, located on the left side of the frame. Magazines are double stack. Sights are fixed. The front part of the frame, below the barrel, is shaped to form an integral Picatinny-type accessory rail.

How to disassemble (field strip) Taurus 24/7 pistols: 1) remove the magazine by pressing the magazine release button; 2) check that the chamber is empty; 3) pull the slide all the way back and lock it open with the slide lock / release lever; 4) rotate the takedown lever (located at the left side of the frame) clockwise until it stops ; 5) carefully pull the take-down lever with its pin out of the frame 6) carefully release the slide stop lever, then push the slide all the way forward and out of the frame; 7) remove the return spring by pushing its head slightly forward and then pulling it out carefully of the detent in the barrel; 7) lift up the barrel from the slide.
Reassemble in reverse order.