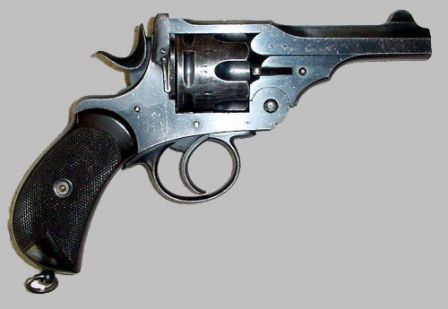 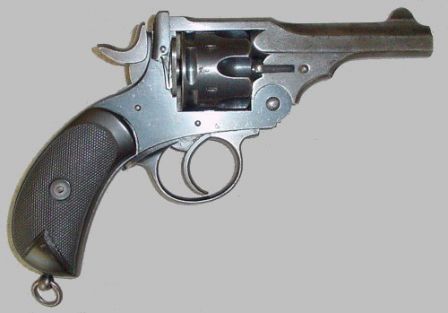 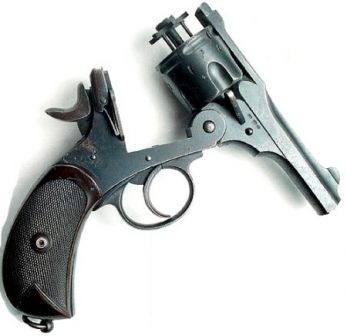 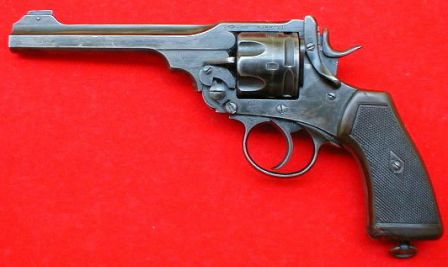 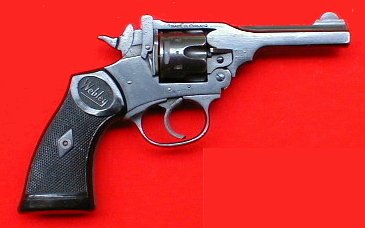 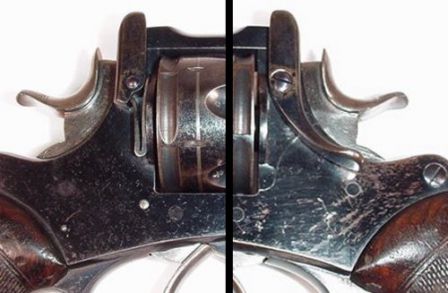 Right and left side views on Webley frame lock

The first top-break revolvers were developed by the Webley & Son company (Webley & Scott Co. since 1897) of Great Britain in the 1870s. The first Webley revolver had been officially adopted for Royal Army & Navy service in 1887, as the ‘Webley Revolver, .455, Mark I’.

It was a top-break, six shot, double action revolver, chambered initially for blackpowder .455 British Service cartridges. These were officially known as ‘Cartridge .455 Revolver, Mark I’. This cartridge launched heavy, 18 gram (265 grain) lead bullets at the relatively slow muzzle velocity of 180 meters/second (600 fps). Later, the smokeless powder version of this cartridge was introduced, but since it was adapted to be fired in early vintage revolvers, the gain in the velocity of muzzle energy was very minor.

All Webley top-beak revolvers featured a two-piece frame, which hinges – “breaks” down at the forward low end for ejection and loading. The ejector is actuated automatically when the frame is broken open, simultaneously removing all six cases from the cylinder. So the user need only break open the gun to extract the spent cartridges. Fresh cartridges can then be inserted by hand.

In the case of the revolver being re-chambered for a .45ACP round, half-moon clips are used to load the gun (two clips, each consisting of 3 rounds). All Webley revolvers were Double Action or Double Action Only, with a very distinguishable barrel shape and frame lock. The lock lever is on the left side of the frame and there is a V-shaped lock spring at the right side of the gun.

Below is the list of all the Webley revolvers that have been officially adopted over the years in Great Britain. Many other variations were also manufactured for civilian and police use.

Webley revolver, .455, Mark 2. Adopted in 1894, almost the same as Mark 1, but a hardened removable steel plate – “blast-shield”, was added at the back of the frame breech, the hammer was strengthened, grip was slightly rounded.

Webley revolver, .455, Mark 4. Adopted in 1899, this was an improved Mark 3, made from a different kind of  steel, with a smaller and lighter hammer and with wider cylinder slots. Since 1905, some Mark 4 revolvers were also made with 5 inch (125 mm) barrels.

Webley revolver, .455, Mark 5. Adopted in 1913. The Mark 5 was designed to accept smokeless (cordite) ammunition, and thus, had a larger and stronger cylinder, and the frame was redesigned accordingly.

Webley revolver, .455, Mark 6. Adopted in 1915, this is the “ultimate” Webley .455 six-shooter. Mark 6 featured a redesigned, more squared-off grip, 6 inch (152 mm) barrels and removable front sights. Mark 6 revolvers were manufactured by W & S until 1921. Later these were manufactured by the Royal Small Arms Factory at Enfield Lock. Oficially rendered obsolete in 1932 with the adoption of the Enfield No.2 .38 caliber revolvers, they were still widely used by British troops during World War Two.

Webley revolver, .38, Mark 4. Oficially adopted for military service in 1942, this was initially a scaled-down version of the .455 Mark 6 revolver, chambered for a .38 S&W cartridge, and developed by W & S in 1923 for police use. These guns were oficially regarded obsolete as late as 1963.

It should be noted, that oficial british .38/200 ammunition was based on the early, blackpowder .38 Smith & Wesson cartridge, and was used with a heavy 200 grain (13.4 gram) bullet, leaving the muzzle velocity relatively low  at about 198 meters/sec (650 fps).