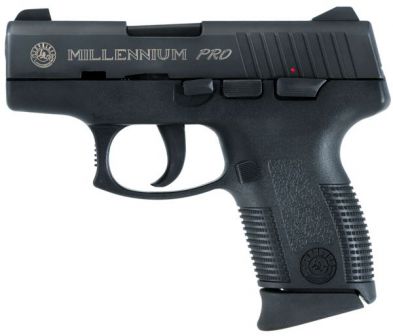 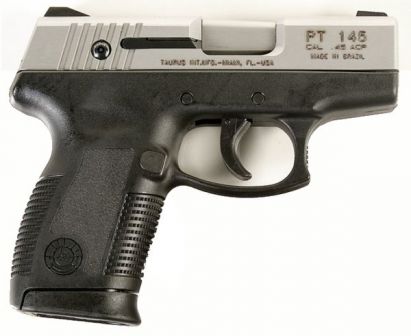 Taurus line of "Millennium pro" pistols is a relatively new addition to the extensive product line of this Brazilian gun maker. These pistols are intended as a concealed carry defensive weapons for civilians, as well as backup weapons for police. These pistols are known for good reliability and adequate firepower, especially considering their relatively compact size.

Taurus "Millennium pro" pistols are short recoil operated, locked breech pistols that use modified Browning-type locking, with single lug on the barrel engaging the ejection port in the slide. Frames of all "Millennium pro" pistols are made from impact-resistant polymer; slides can be made from carbon or stainless steel, or from titanium. Trigger is double action only, striker-fired, with internal firing pin block safety. Additionally, a somewhat redundant manual safety is provided in the form of the lever, located on the left side of the frame. Magazines are double stack on 9mm and .40SW pistols, and single stack on .45 caliber pistols. Sights are of low profile fixed type, with contrast inserts for better visibility.

How to disassemble (field strip) Taurus "Millennium Pro" pistols: 1) remove the magazine by pressing the magazine release button; 2) check that the chamber is empty; 3) pull the slide all the way back and lock it open with the slide lock / release lever; 4) rotate the takedown lever (located at the left side of the frame) clockwise until it stops; 5) carefully pull the take-down lever with its pin out of the frame 6) carefully release the slide stop lever, then push the slide all the way forward and out of the frame; 7) remove the return spring by pushing its head slightly forward and then pulling it out carefully of the detent in the barrel; 7) lift up the barrel from the slide.
Reassemble in reverse order.