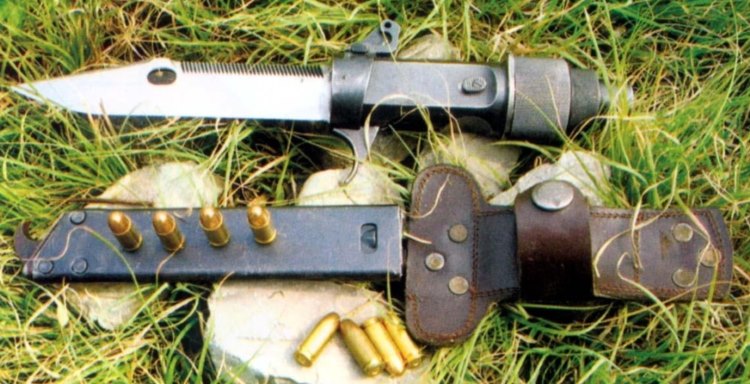 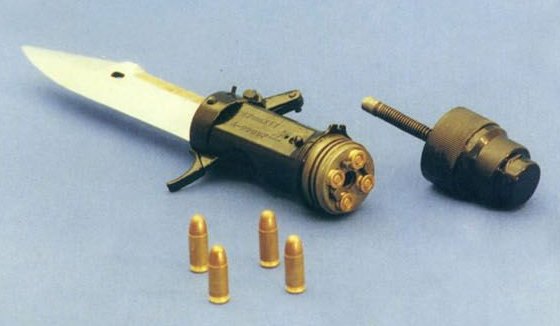 QSB-91 shooting knife was developed in China during early 1990s, and is in use by special elements of PLA and Chinese armed police.

QSB-91 is a fixed blade combat knife with round hollow handle, made of metal. Inside the handle there are four fixed 7.62mm barrels, pointing toward the blade (two barrels at each side of the blade). Each barrel is reloaded separately from the breech, once the screw-on end cap is removed. The end cap contains a rotating striker, which turns 90 degrees before striking next primer every time the trigger is pulled. Trigger is placed at the front of the grip and doubles as a guard for the knife. Trigger unit is of double action only type, with relatively long and heavy trigger pull. Fixed sights are located on the grip, at roughly 11 o’clock position when looking from the rear. To fire the built-in gun, knife must be removed from the sheath, loaded and pointed to the target, blade first. Once sight is acquired, trigger is pulled up to 4 times, each time discharging one barrel. Apparently, QSB-91 knife cannot be fired with sheath on.
Type 64 pistol ammunition is of conventional type, based on the 7.65x17SR Browning / .32ACP cartridge, but with rimless case. Therefore, unlike practically noiseless Russian NRS shooting knife, QSB-91 shooting knife is far from being quiet when it is used to shoot at the enemy. Claimed effective range when firing built-in barrels is stated as 10 meters.