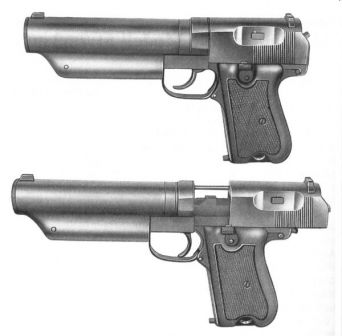 Type 64 silenced pistol; top, ready to fire; bottom, with the slide locked open after the last shot from magazine has been fired. 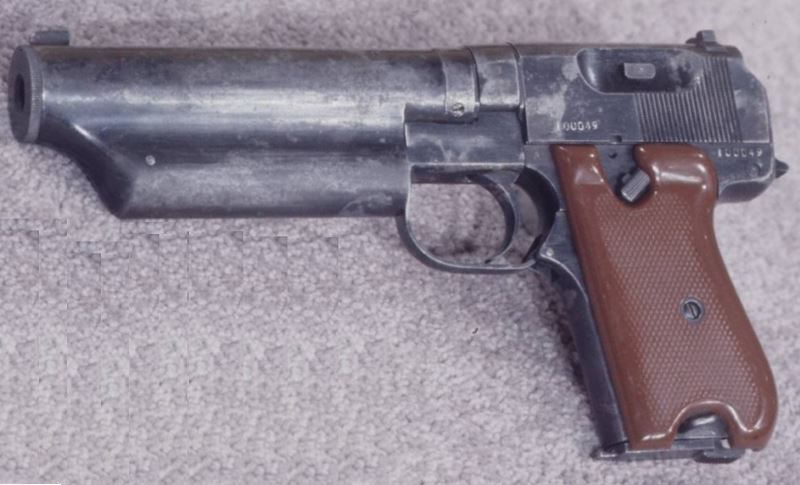 The Type 64 silenced pistol has been adopted by the Chinese military in the mid-1960s as a special purpose silenced weapon, intended for both military and political clandestine operations. Unlike most other silenced pistols, the Type 64 is an integrally silenced weapon, and not an adaptation of any existing "non-silenced" design. Pistol fires proprietary 7.65mm Type 64 ammunition, especially developed along with this pistol. Type 64 7.65mm cartridge is based n the old 7.65x17SR Browning / .32ACP round, but is of true rimless design (7.65mm Browning/.32ACP is of semi-rimmed design), and is not interchangeable with western ammunition. Type 64 ammunition is of relatively low power, which contributes to the low sound of fire and low effective range of pistol – probably no more than 10-20 meters. When fired from the Type 64 pistol, the Type 64 ball cartridge propels the 4.8 gram (74 grains) bullet to the muzzle velocity of 240 meters per second (790 fps). Type 64 pistol is generally replaced in service by the Type 67 silenced pistol, which is slightly more compact and a good deal lighter.

Type 64 silenced pistol is a blowback operated, integrally silenced pistol. Integral silencer consists of a large thin steel case, which contains steel mesh and several baffles, which are used to slow down and cool expanding muzzle blast. To further decrease the sound signature of firing pistol, the blowback mechanism can be blocked using the cross-bolt button, mounted in the slide. When lock mechanism is engaged, Type 64 pistol turns from a semiautomatic into a manually operated magazine fed weapon, thus avoiding the sound of the recoiling slide. Because of a silencer, recoil spring is located at the rear of the slide, above the barrel, along with guide rod. The Type 64 pistol has a fixed sights. Trigger is of single action variety, with external hammer, and a manual safety, located on the frame above the left grip. Cartridges are fed from single stack, detachable magazine which holds nine rounds.