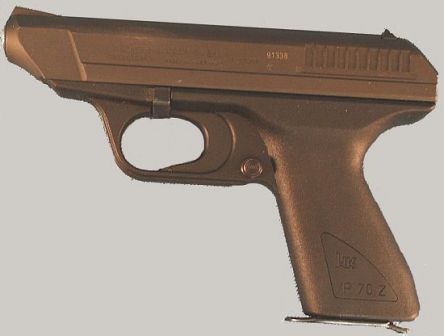 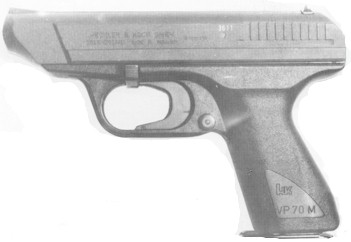 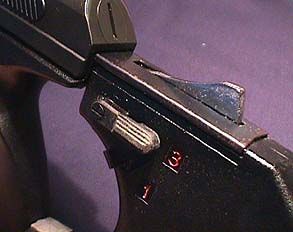 Сlose view on fire selector built into holster-stock of the VP 70M.

The VP 70 pistol is quite unique, being well ahead of its time in some respects, and while it did not catch the military or civilian market, it set the marks for the many more sucessful followers. The VP-70 (Volks Pistole model 70) had been developed by HK around 1968, and the production began in 1970. Production of the military / law enforcement version, VP-70M, had been ceased fithin few years. Civilian version, VP-70Z, had been manufactured untill 1989.

The VP-70 is a blowback operated, striker fired, double action only pistol. In military version, VP-70M, it can be used along with detachable shoulder stock – holster, which has built in fire selector device, that allows to fire single shots or three rounds bursts. Withouth the stock attached, only single shots can be fired. Another then-unique feature was the polymer frame. In fact, the VP-70 was the FIRST EVER productional pisol with polymer frame. The DAO trigger with no manual safeties was alo not so common in the early 1970s. Despite the simply blowback operation, not so common in 9mm Luger/Para handguns, the VP-70 had modest felt recoil, but heavy and long trigger pull does not helped to improve accuracy.