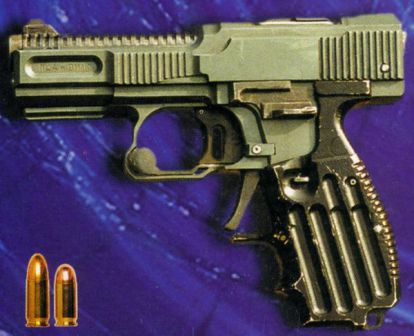 The most intriguing small arms “producer” in Ukraine was the KB-ST (Design Bureau for Special Techniques). This highly controversial organization was established in 1993 and during the late nineties announced a series of a “revolutionary” small arms designs, such as sub-machine guns and sniper rifles of outstanding, if not unbelievable, characteristics. However, no foreign experts ever were able to test these “wonder weapons”, and by now it seems that KB-ST has folded and gone out of business. One of such wonder weapons widely advertised in Ukrainian literature as “unique” and “superior” was the Pistolet Shevchenko, or PSh in short. This overly complicated and strange-looking weapon was also an amalgam of previously known ideas, some of which were tried and rejected 50 or even 100 years ago. To start with, the PSh used a two-stage feed system, borrowed from the 1900-period Gabbet-Fairfax “Mars” pistol of British origin. This system, in which the cartridge is first pulled back from the magazine and placed on a lifter, then raised inline with the barrel and fed forward and into the chamber, was necessary because of the elongated barrel, which protruded back into the action. To further complicate the construction, its designer Shevchenko used a very rare gas-operated locking system first (and probably last) used in a WW2-era prototype Horn assault rifle from Germany. This system employs two small gas pistons that are forced by gas pressure sideways from the frame and into locking recesses in the slide. Another strange feature was a hand-cocking device, probably taken from HK P7 pistol, but in a twist – instead of full-hand cocking lever PSh employed some form of a second trigger, located below the “primary” trigger and used to cock the striker when pressed by one middle finger. If you still not have enough of this design, it also had a ribbed, aluminium jacket on the barrel, and a very special sort of slide stop, that locked slide open once there was ONE cartridge left in the gun. The claimed purpose of this arrangement was to allow shooter to make its “deliberate last shot” – in its own head, probably. Not surprisingly, this weapon, “available” in 9×18 PM, 9×19 and .45 ACP, never went past magazine pages, and probably, a handful of prototypes. Nevertheless, the author decided to include it, if just for the amusement of the readers.