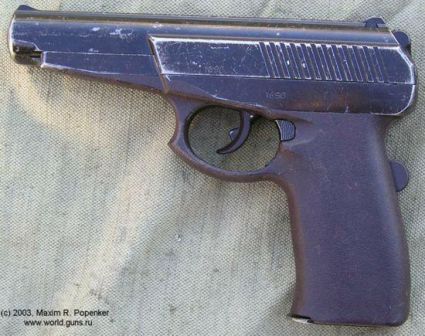 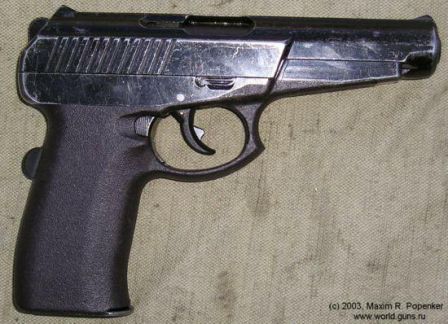 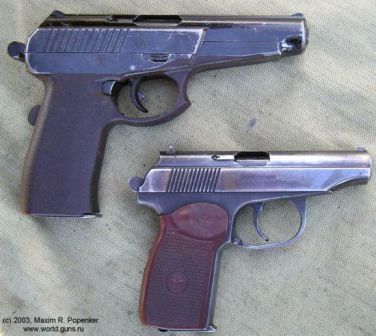 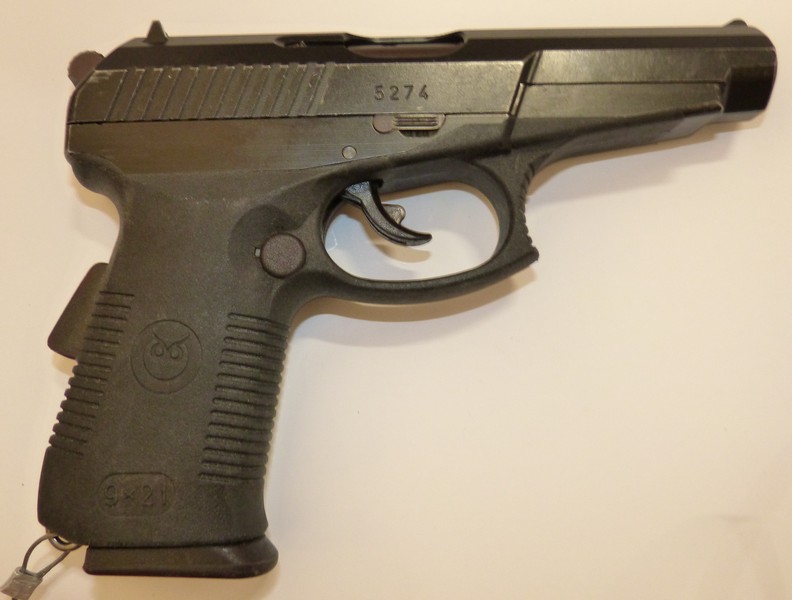 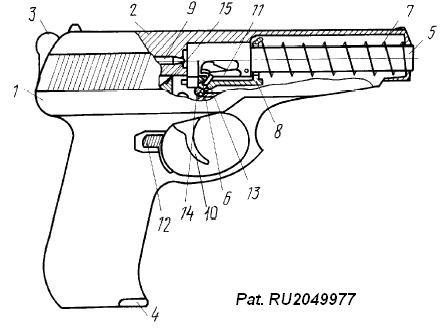 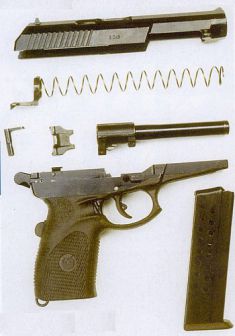 Initially this gun was designed to meet Russian Army requirements for a high capacity pistol with effective range of no less than 50 meters. To achieve such characteristics, a new cartridge was developed – SP-10 (9×21) with AP steel core bullets, designed to deal with targets in bulletproof vests or hiding in cars etc (capable of near to 100% penetration of 30 layers of Kevlar plus up to 2.8mm titanium plate at 100 meters).

When, in the mid-1990s, Russian Army lost interest in this gun in the favor of the 9x19mm developments (see Yarygin PYa), some Russian Law-enforcement agencies picked up this gun, and in 1996 it was adopted by FSB (Federal Security Service, a part of the former KGB) and some other agencies. The development of this pistol and ammunition for it continued into the 21st century, and, in 2003, its improved version was finally adopted by the Russian Government for military and police use as the SPS – Samozaryadnyj Pistolet Serdjukova – Serdyukov Self-loading pistol. Originally known as “Gyurza”, or as SR-1 “Vektor” (in FSB service), this pistol had been developed by the designer Piotr Serdyukov at TSNIITOchMash (Central Research and Development Institute of Precision Machine Building, in Klimovsk city, Russia). At the present time this pistol is used by the various FSB and FSO (Russian state VIP protection service) troopsm as well as some Police SWAT-type units (OMON, SOBR).

Current production version of this gun is known as SR1M. It features slightly improved ergonomics and some minor internal modifications. An SR1MP version is a kit, consisting of the SR1M pistol, special adapter with one or four Picatinny rails, and a quick-detach tactical suppressor, designed to work with supersonic 9×21 ammunition.

The SPS is a short recoil operated, locked breech pistol. The slide to barrel locking is achieved by the tilting locking piece, located under the barrel, much like the Walther P38 or Beretta 92. The return spring is located around the barrel. Frame is made from steel upper part and the polymer grip and the trigger guard. Slide is made of steel. Double action trigger featured automatic Glock-like trigger safety, plus internal firing pin safety and the automated grip safety. No manual safeties are provided on the gun. Gun also features automatic slide stop, with no manual release. Instead, slide is released automatically when a fresh magazine is inserted into the grip. The external hammer can be put on the half-cock position for increased safety. It must be noted, that the DA mode will fork only if the hammer is on half-cock. The gun is fed using steel, double stack and double feed magazines that hold 18 rounds of 9×21 mm ammo.

The 9x21mm ammunition is available in basic SP-10 /7N29 Armour Piercing load, as well as with expanding increased stopping power bullets, non-ricocheting training bullets, and some other types such as tracers. The one downside of this ammo is that it is quite expensive, at least now, having cost several times more than of any commercially available 9x19mm ammo. It is also more powerful, and not interchangeable with commercial 9×21 IMI ammo, available in some European countries.