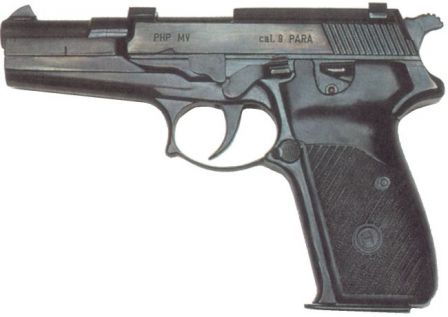 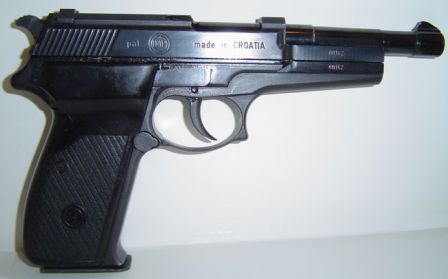 PHP (Prvi Hrvatski Pistolj – first Croatian pistol) is a somewhat strange weapon which was hastily developed in Croatia during its war for independence in early 1990s. Production and quality of this pistol (which was produced in at least two versions, short-barreled PHP MV 9 and long-barreled PHP VM 17) was sporadic, and it was soon replaced in production and use by much better and more modern HS 2000 pistol.
By design, this pistol represents a mix between Beretta 92 and Walther P38 pistols. The basic short-recoil operated action with vertically tilting locking piece is similar to both pistols, the general appearance of the open-top slide is close to the Walther but the single return spring below the barrel is apparently an Italian influence. Trigger is of traditional double action type, and the safety consists of a manual decocking lever, located on the left side of the grip frame. Magazines are double-stack and hold 15 cartridges.