What is the modern handgun? Why is this piece of crafted metal and (more recently) hard plastics still in great demand in military forces and police departments ALL around the world? The answers are: They are small, lightweight (well, most of them 🙂 ) and provide good firepower. They’re suitable, not only for defensive situations, but for offensive ones, and even for medium sized game hunting. Of course, for each situation,  a careful choice of the proper handgun AND ammunition must be made. Handguns are divided into a few different classes: semi-automatics (or pistols), revolvers, and non-automatic (single or multibarreled, single-shot or magazine fed). 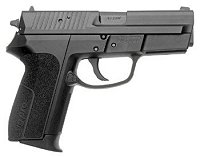 Semi-automatics use part of the energy produced by the burning powder to remove the used cartridge from the chamber, cock the hammer (or striker) and load a new cartridge into the chamber, readying the pistol for the next shot. Cartridges are usually fed from a box magazine, located in the pistol’s handle. Box magazines may contain up to 15 cartridges (sometimes more) in single or double-stacked columns, depending on the pistol model, and are easy (and very quick) to reload.

Revolvers take their name from the rotating (or Revolving) cylinder, which contains the cartridges. Usually the cylinder 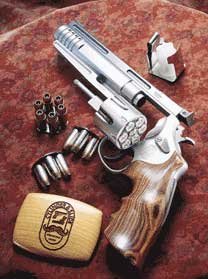 holds from 5 to 7 rounds, although some .22 caliber revolvers may contain up to 8 or 10. Cartridges in the cylinder may be reloaded in two ways (depending on the revolver design) – one by one, as, for example, found with the Colt PeaceKeeper (and almost all old-timers); or all simultaneously – when the cylinder is switched to the side or when the frame is “broken open.” Both revolvers and semi-autos have two main styles of action operation: Single action and Double action.

Single Action means, that the Revolver must be manually cocked by engaging the hammer (and, thus, the cylinder is rotated to the next cartridge) for each shot. This mode was the only one available in old-time revolvers (such as the Peacekeeper), and is still available as a built in feature of most double-action revolvers. This mode improves accuracy but slows down the firing rate. For Semi-automatics, Single Action means that the pistol must be manually cocked for the first shot (usually, this is done by pulling the slide – this action cocks the hammer and feeds a cartridge into the chamber). For the second, and all consecutive shots, cocking is automatic, when recoil force from the shot pulls back the slide.

Double Action for the Revolver means that the hammer for each (including the first) shot is cocked by trigger pull (this action also rotates the cylinder to the next position). This mode speeds up the firing rate and simplifies shooting actions, but greatly increases trigger pull (from 2.2-4.4 lbs usually found in single-actions, to 8.8-12.2 lbs in double-actions). In the case of the Semi-autos, the hammer is usually cocked by trigger pull for the first shot only; the second and consecutive shots are done in single-action mode. However, the first load must be fed into the chamber by slide pull. Some (most of them – compact) semi-autos and revolvers employ Double-action-only mode, which cocks the trigger for each shot, thus excluding single-action.

One of the biggest questions about handguns is: Why are Six-guns (a slang TERM for revolvers) still around when there’s such a wide choice of very reliable and large capacity semi-auto handguns? The old answer is – reliability. Usually, given the same price (in the low- to mid-range of prices), the revolvers were more reliable, primarily, because of the simplicity of their design.

Today there are a lot of inexpensive semi-autos, that can hold twice or even triple the loads ready to fire, than most common revolvers. But sixguns are still here.. One of the main reasons for keeping the revolver around is that they’re almost completely insensitive to the kind of ammunition you might use. If your cartridge is capable of pushing a bullet through the barrel of the sixgun – you’ve got a working gun. No jams, no stoppages. Even in the case of a misfire you’ve only got to pull the trigger again – and the next round will go bang, just fine. In semi-auto, you need sufficient power to cycle the slide, thus rendering underpowered loads almost inoperable. Also, in case of a misfire, or jam, you need to manually cycle the slide to fire the next round. In a defensive scenario, this may cost you another second, and maybe – your life.

So, in general, sixguns are far less sensitive to ammo quality, and, due to simplicity and their inherent design features, they can withstand far more abuse. Also, when you go to the other, higher-end loads (speaking in terms of power), no semi-autos could withstand the pressures generated by loads such as .454casull or .475Linebaugh. Sixguns can.

The main drawbacks of a sixgun are small ammo capacity, slower reloading and bulkiness. While 6 rounds may be sufficient for self-defense scenarios, it may really not be for police or SpecOps operations. Also, replacing the magazine in semi-auto is usually a much faster process than reloading a revolvers’ drum. Due to the significant cylinder diameter, even 5-shot revolvers are harder to carry concealed than modern compact handguns – the latter could also hold tvice as many cartridges.

The selection of a gun is, undoubtably, the owners’ responsibility. In my opinion though, revolvers are more suitable for civilians’ self-defence and for hunting, while semi-autos are better suited as combat and police weapons.