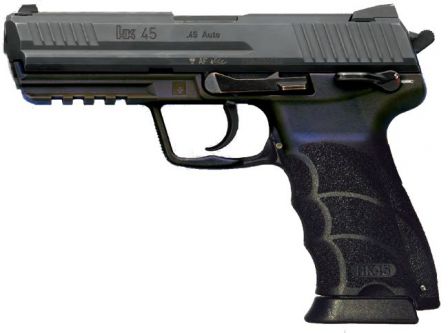 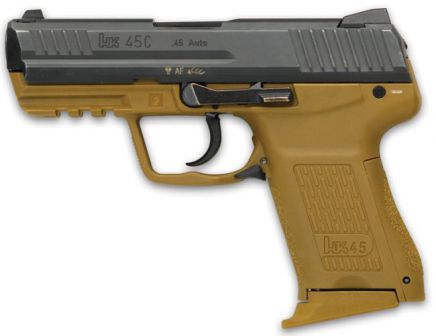 The HK 45 pistol is the most recent handgun from famous German arms-making company Heckler und Koch. The HK 45 was born as a competitor for a now-discontinued US Army program for a new .45 caliber military pistol. It is based on proven technical solutions of the HK USP pistols merged with enhanced ergonomics of the 9mm HK P30 pistol. HK 45 pistol features improved grip with replaceable backstraps and slimmer profile, recountured and less blocky slide, and enhanced, fully ambidextrous controls. Pistol is available in two versions, standard HK 45 and compact HK 45C, which features smaller dimensions and shorter grip and slimmer, which houses shorter magazine, compatible with HK USP 45C pistols. New pistols will be available in several frame colors, including black, military green and desert tan. Other standard features include low-profile "combat" sights with three dot system and an integral Picatinny rail under the frame.

The HK 45 pistol is short-recoil operated, using modified Browning type locking system with tilting barrel. Barrel movement is controlled by the lug, located below the breech. Barrel locks into the enlarged ejection window in the slide. Front of the barrel is fitted with rubber O-ring which improves barrel-to-slide fit and enhances accuracy. Recoil system features an additional polymer buffer which decreases stress on the frame and softens felt recoil. Frame of the gun is made from impact-resistant polymer, with removable grip backstraps (available in three sizes to be adjusted for most shooters). Trigger is of modular design, available in several versions including standard DA/SA, DAO and HK-proprietary LEM (pre-cocked) versions. Manual safety and/or decocker levers can be installed on either side of the frame; slide release levers are ambidextrous by default. Magazines are double stack, and hold 10 (for full-size) or 8 (for compact) rounds of .45ACP ammunition.