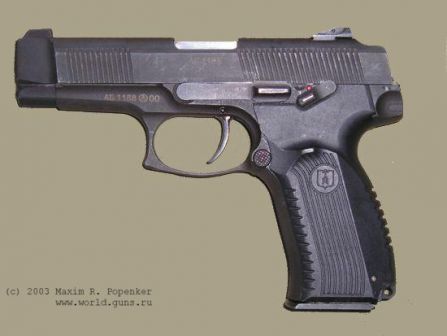 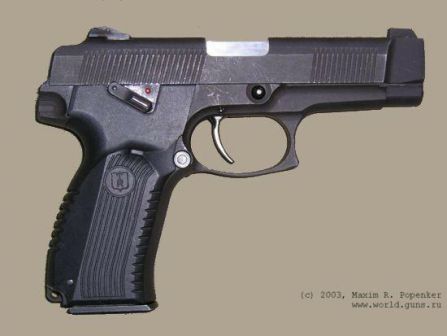 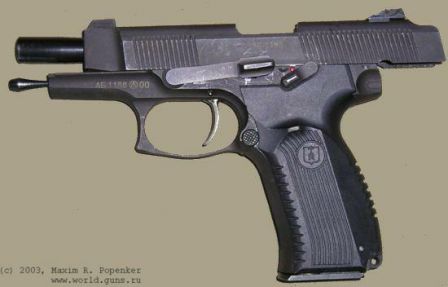 The PYa (Pistolet Yarygina – Yarygin pistol) was developed for the Russian Army trials, codenamed "Grach" (rook). These trials were started by issuing initial requirements for a new military pistol in 1993. Than new pistol should had have a DA trigger, large capacity magazine, all steel construction and be able to be converted into 9×18 PM and PMM, 9x19mm Luger, and 7.62x25mm TT chamberings. Later on, the multicaliber option was dropped from military requirements, and in the late 1990s Russian army settled on the improved version of the worlds' most popular 9mm Luger/Parabellum round, very hot loaded (peak pressure generated by 7N21 is well beyond 9mm +P standards) and fitted with armour piercing bullet with hardened steel core. Several designs were submitted to the trials, but eventual winner was the pistol, designed at the state Izhevsk Mechanical Plant by the Vladimir Yarygin. This pistol, initially known as the 6P35 (military index during trials) or as MP-443 "Grach" (manufacturer's designation), now is officially adopted by the Russian Government for Military and Law Enforcement use under the PYa designation, and already issued to some Russian Army units, most probably located in Chechnya.

In those ages of lightweight alloys and plastics, and complicated trigger systems, the all steel DA pistol may look little outdated and conservative, but, in my opinion, there's nothing wrong with the conservative approach, especially if it the result is well balanced and fits the intended niche well, which PYa does. I had the chance to examine the production pistol, as well as to see it in action (during Russian Law Enforcement IPSC competition, held in September, 2003, near the St.Petersburg). For me, PYa appeared as a well balanced, sturdy pistol with adequate accuracy and decent firepower. The only things that could be improved, in my opinion, are the fixed sights, and the shape of the polymer grip panels, that felt too angular in my palm.

The PYa is a short recoil operated, locked breech pistol. It uses a modified Browning "High Power"-style locking, with the cammed slot under the barrel, that is used to lock and unlock the single lug on the barrel with the ejection window in the slide. The slide and frame are made from carbon steel, the barrel is made from stainless steel. The conventional DA trigger features an ambidextrous manual safety on the frame, that could lock the hammer either in lowered or in cocked position, allowing for "cocked and locked" mode carry. There's no decocker, and additional automated safety is built into the system, that locks the firing pin when trigger is not pressed. The external hammer on production pistols is partially enclosed from the sides by the slide extensions, to facilitate snag-proof handling. Front sight is machined with the slide, rear sight is dovetailed into the same. Both sights featured white non-luminous inserts (tritium-filled "night" sights available as option). Wrap-around grip panels are made from polymer, and the grip is provided with the lanyard ring. Button-operated magazine release is located at the base of the triggerguard, and can be mounted on either side of the frame, depending on the user preferences (easily re-installed by the user itself in a minute). Dual stack magazines are made from steel and hold 17 rounds of 9x19mm ammunition, plus one in chamber. There's also some information that a 18-rounds magazine will be introduced for PYa in 2004.