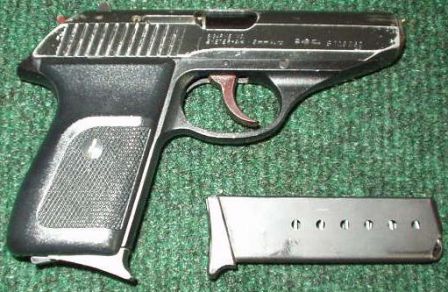 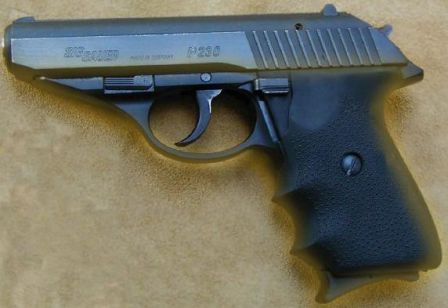 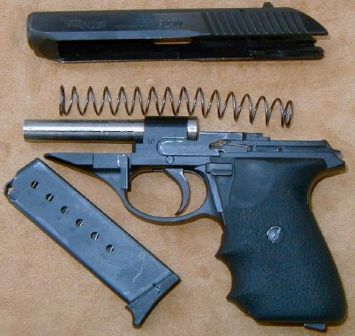 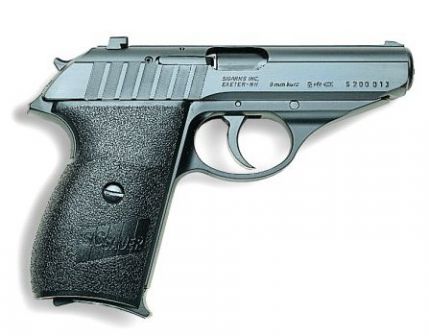 The SIG-Sauer P-230 pistol was designed and produced in Germany by the joint venture of the J.P.Sauer (Germany) and a SIG Arms (Swiss) as a compact police and self-defence pistol. P-230 hit the market circa 1977 and was manufactured untill the 1996, when it was replaced by the P-232 pistol, which is no more than technologically and ergonomically improved P-230. Original P-230 was offered in variety of 3 calibers – 9mm Browning Short, 7.65mm Browning and a now discontinued 9mm Police, which was designed as a most powerful round suitable for simple blowback pistols. 9x18mm Police is rougly equal in terms of power to the Russian 9x18mm Makarov, but these two ARE NOT interchangeable! Attempt to fire 9x18mm Mak in the 9mm Police P-230 can result in serious damage to the pistol and injury to the shooter!

P-230 and P-232 are quite similar internally. Both are simple blowback operated, hammer fired pistols, with double action triggers and a manual decocker levers mounted on the left side of the frame, behind the trigger. P-232 also featured automated firing pin safety. Both pistols lack the slide stop. Both pistols can be found in standard form, with steel slide and aluminium alloy frame and blue finish, or in SL versions, with both slide and frame made from stainless steel. Latter models are slightly heavier and wear a polished steel finish. P-232 featured drift-ajustable rear sights, dovetailed into the slide. Feed is from single stack magazines for 7 9mm or 8 7.65mm rounds. It should be noted that both P-230 and P-232 feature magazine catch, located at the heel of the grip.

Both P-230 and P-232 are high quality, durable and reliable guns, as every other pistol, produced by the famous Swiss-German alliance. These guns are well suited for personal defence, concealed carry and as a backup guns, offering good accuracy and mild recoil.