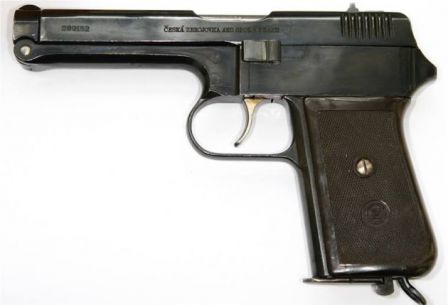 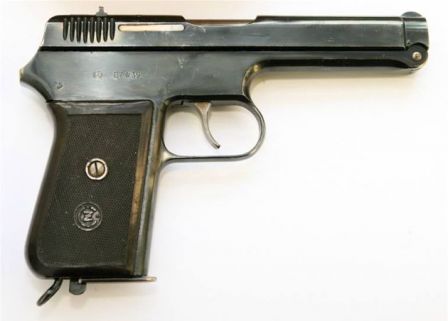 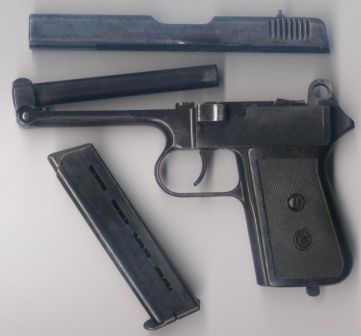 The CZ Vz.38 pistol, also sometimes referred to simply as CZ-38, was developed in 1937 in an attempt to fullfil requirements, issued by Czechoslovak army, for a sidearm which would be more safe and simple  to handle than previously used CZ Vz.24. New gun was designed by Frantisek Myska, and submitted to military trials early in 1938. After trials, which were consdered sucessful, Czechoslovak army ordered significant numbers of these pistols, but Germans took over the Czechoslovakia before any guns could be delivered. A few guns were delivered to Bulgaria in 1939, but  the rest of the production (about 10 000 guns) was consumed by German police and security forces. Production of this gun has ceased by the end of WW2, and was never resumed later. This is not surprising, as the gun was overly big and heavy for the cartridge it used (9mm Browning Short, also known as 9mm Kurz or .380 ACP). Also, the double action only trigger was too heavy, severely impairing accuracy of fire.

The CZ Vz.38 pistol is a simple blowback operated weapon. It is unusual as its barrel at the muzzle is mounted in the special bushing, which in turn is hinged to the frame. Upon the disassembly, operator pulls back the dismounting slide, located on the left side of the frame, then pulls the rear of the slide up. This causes the barrel and slide to rotate up around the axis, located below the muzzle, and also disengages the slide from return spring, which is located in the frame below the barrel. Once the rear part of the slide is clear off the frame, slide can be bulled back and slid off the barrel. This allows for easy diassembly, cleaning and examination of the barrel bore. The trigger is of double action only type, with external hammer. No manual safeties are provided by default (export Bulgarian version had additional manual safety on the left side of the frame). Magazine is of single stack type, magazine release catch is located at the base of the grip.