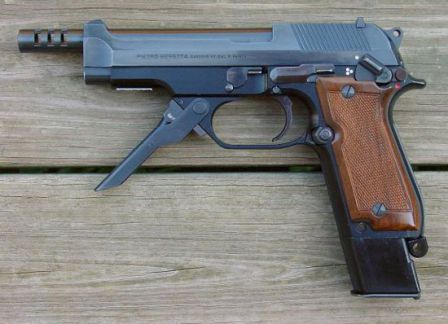 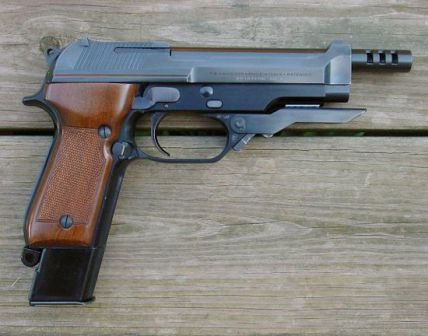 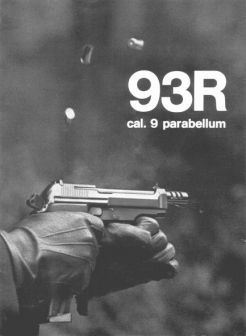 Beretta 93R automatic (or machine) pistol has been in development during the second half of the 1970s, and first appeared circa 1977. The index 93 stands for "9mm, 3rd model", and the suffix "R" means "Raffica" – burst[-firing] in Italian language. This special purpose sidearm was intended for police and military forces who may require improved firepower in compact weapon during the close-quarter combat, such as room-to-room search or VIP protection. Because the compact size and relatively powerful 9mm Parabellum ammunition necessary resulted in high cyclic rate of fire, Beretta designers decided do limit the practical rate of fire by introducing a burst limiter, which allowed only for three shot bursts, in addition to the standard semi-automatic fire. To further improve the control during the burst fire, the pistol was fitted with folding forward grip, and the detachable folding shoulder stock. Early production pistols also featured a ported barrel to decrease barrel climb, but later this feature was dropped. The Beretta 93R is no longer listed in Beretta military & law enforcement catalogs, but it is used by some Italian police and anti-terrorist forces, such as Carabineri's GIS and NOCS, and by some other paramilitary forces. The burs fire mode is of dubious value for anybody but the most professional shooters, who need the improved effectiveness at very short to short ranges; the folding shoulder stock probably can help for long range single shot accuracy.

The basic design of the Beretta 93R machine pistol is based on the famous Beretta 92 pistol; The 93R uses the same short recoil operated, locked breech system with vertically cammed lock. The slide retains typical Beretta-style open-top design. The trigger mechanism, however, is somewhat different from Beretta 92, as it is a single action only, with non-ambidextrous frame mounted safety and additional fire mode selector (both mounted on the same axis, with the selector lever pointing forward and safety lever pointing backward). The mechanism which controls the length of the bursts is located behind the right grip panel. Beretta 93R pistol is supplied with proprietary 20-rounds magazines but also can use standard Beretta 92 type magazines.