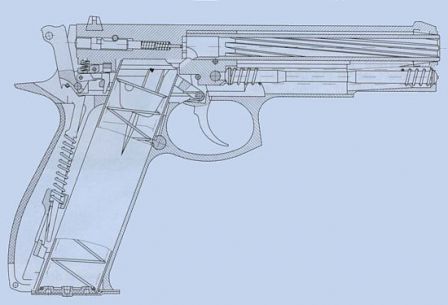 The Fort 14 pistol has been developed by the 2003 at the state-owned FORT factory for Ukrainian security and police forces. In attempt to produce more powerful weapon, than the earlier 9x18mm PM Fort 12 pistol, the Fort 14 has been initially designed for the more powerful 9×19 Luger / Parabellum ammunition, and thus has locked breech design with longer barrel. Later on, designers switched back to the less powerful 9×18 PM/Makarov ammunition, which usually does not require locked breech system, so new pistol has been redesigned with the plain blowback system. However, it retained the easily detachable barrel, usually typical for locked breech, recoil operated designs. Compared to the Fort 12, the Fort 14 has significantly longer barrel and sight radius, both resulting in improved accuracy, and slightly increased magazine capacity. SA special "tactical" version of the Fort 14 is produced, with extended threaded barrel, which can accept a silencer, and with the accessory rail for light or laser on the frame, under the barrel. First production Fort 14 pistols went to selected units in Ukrainian police in 2003.