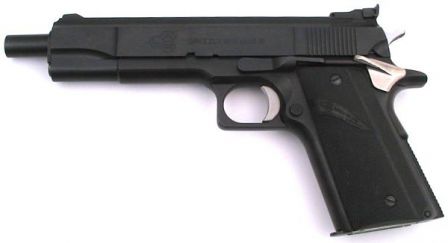 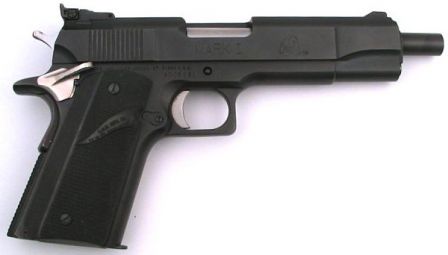 The Grizzly Win Mag pistol has been developed during early 1980s by L.A.R. Manufacturing Inc (USA; L.A.R. stands for names of company founders – Larisch, Augat and Robinson). This pistol has been designed around the very powerful .45 Winchester Magnum (.45 Win Mag, metric designation 11.43x30mm) ammunition, which generates muzzle energies in the 1100 Joules (810 ft-lbs) region. The prime intended niches for that round and Grizzly pistol were hunting and silhouette shooting, as massive pistol was way too heavy for defensive carry, and .45 Win Mag ammunition was overpowered and generated plenty of recoil. Despite (or because of) merits of .45 Win Mag ammunition, the Grizzly pistol was designed as a multi-caliber platform. Standard Grizzly mark I pistols were sold in .45 Win Mag chambering, but patented factory conversion kits were available for conversion of said pistol into one of many popular calibers, including .45ACP, 10mm Auto, .357 Magnum and several others. Such kits included new barrels, barrel bushings, springs, magazines, as well as "multi-caliber" extractors and ejectors which replaced dedicated ".45 Win Mag only" extractor and ejector of the basic weapon. Later on, LAR manufacturing also introduced two slightly enlarged version of the Grizzly, known as Mark IV and Mark V. Mark IV pistols were chambered for popular .44 Magnum revolver round; Mark V were chambered for very powerful .50AE ammunition, in an obvious attempt to catch up with competitors such as IMI / Magnum Research Desert Eagle or AMT Automag. However, for various reasons manufacture of Grizzly pistols has ceased by the turn of 21st century, and today these pistols are no longer made. However, L.A.R. Manufacturing Inc is still in business and still offers spare parts and service for Grizzly Win Mag pistols.
Grizzly pistols were known for good accuracy, high quality and fierce recoil, especially in Mark V .50AE version; these pistols required replacement of return springs quite often, about every 1000 rounds or so (in more common calibers return springs can serve ten or twenty times more with not a single problem). Pistols were available with different barrel lengths (6 1/2 inch barrel being the standard), with optional muzzle brakes and/or compensators.