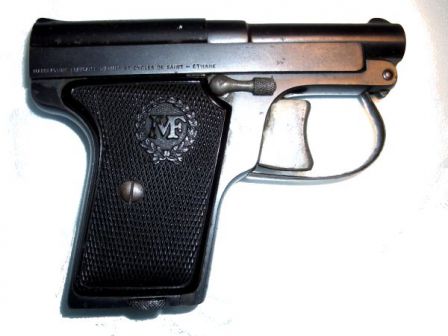 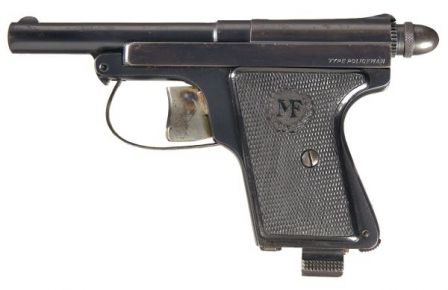 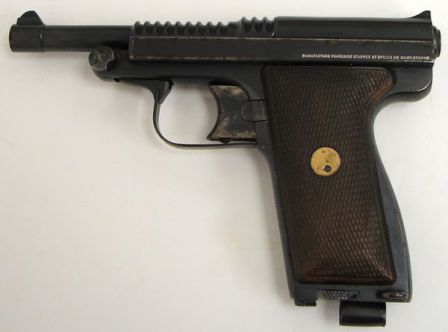 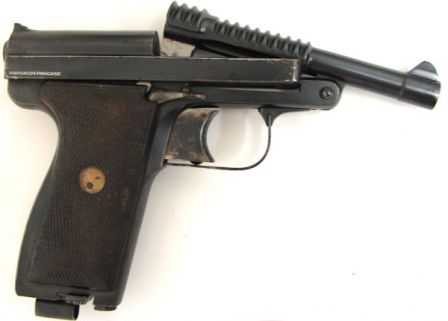 Manufrance Le Français Armee pistol, with barrel tipped up for loading. Barrel latch lever is visible above the trigger 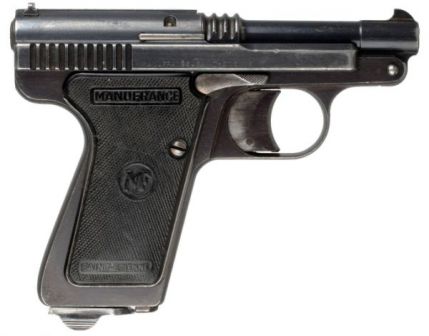 Manufrance Le Français pistol in 7.65mm Browning (.32ACP) caliber, model of 1950. Note that it has slide serrations and spent cartridge extractor, unlike all previous models 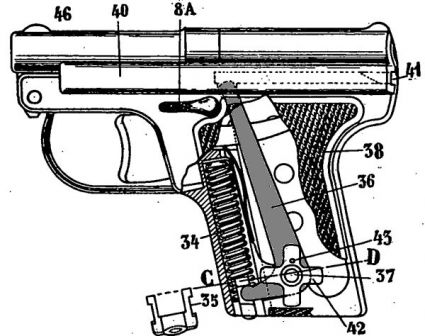 Diagram from original French patent, issued to Manufrance, showing the typical recoil spring arrangement of all Le Français pistols. The lever which connects the slide with return spring is marked with grey color. Two such levers are concealed under both side grip panels.

Le Français (Le Francais) semi-automatic pistols were originally developed in 1913 by French small arms designer Etienne Mimard, who at the time worked for the French company Manufacture Française d’Armes et de Cycles de Saint-Étienne, which was later renamed to Manufrance. This was simple and unorthodox weapon, which was put into production in 1914 as a pocket-type personal defense sidearm, chambered for then-popular 6.35mm Browning (.25ACP) cartridge, and designated as "Le Francais" (the French). In 1922 the basic "Pocket" model was fitted with enlarged barrel and a spare round loop at the base of the magazine, and became the Le Français "Policeman" pistol. this weapon was manufactured by Manufrance until 1968, and sold to various police units in France, as well as to general public. In 1928 Manufrance introduced the biggest of the Le Français series pistols, known as the Armee (Army) model. It was submitted for French army trials but eventually lost. Nevertheless, the Le Français Armee pistol, chambered for 9mm Browning Long ammunition, was put into production, which lasted until 1939, with slightly less than 5000 Army model pistols made. Since 1950 Manufrance also manufactured a 7,65mm Browning caliber pistol under the same label, which was sold mostly for civilian markets. This model was the only one of the whole "Le Français" series to have slide serrations, and it was manufactured by Manufrance between 1950 and 1965.

All Manufrance Le Français pistols used simple blowback action. The return spring was located vertically in the grip, ahead of the magazine well. It was connected to the slide with dual rocking levers, located below each grip panel. When slide recoiled, these levers pivoted back and compressed the return spring. The barrel was connected to the frame by the pivot below the muzzle and by the simple catch below the chamber (breech). There was no extractor, and spent cartridges were thrown out of the barrel by gas pressure. Dud or unfired cartridges were extracted manually, often with the help of the cleaning rod or other similar object. Since there was no normal way to manually cycle the slide, user had to release the barrel lock (push the lever, located above the trigger on the right side of the frame), and then tip the rear part of the barrel up, exposing its breech. Once barrel was tipped up, user was able to load cartridge directly into the chamber or manually extract unfired cartridge. The only standard way to fully load the gun was to manually load the round into the chamber and then insert the full magazine. To facilitate faster reloading, some models were fitted with spare cartridge loop at the magazine base. This loop held additional cartridge which user had to hand load into the chamber before inserting the fresh magazine. Magazines were of single stack design, magazine release was located at the base of the grip. The trigger was of double-action only type, striker fired. No manual safety was provided. The 7,65mm  Le Français pistols of post-WW2 manufacture were modified with addition of conventional external extractor and slide serrations, which allowed for more conventional loading and unloading procedure. The tipping barrel, however, was retained.