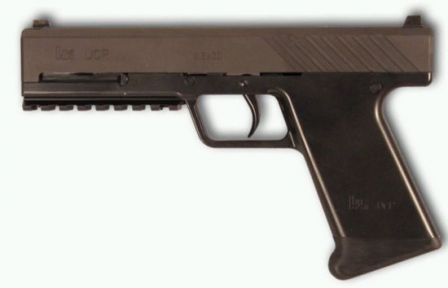 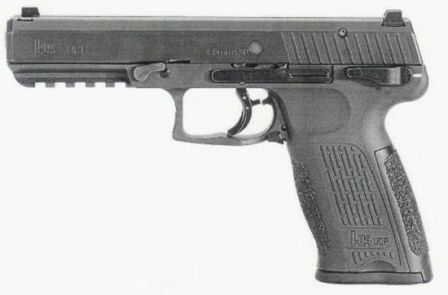 The Ultimate Combat Pistol (UCP) is the most recent development of famous German company Heckler und Koch. The development of UCP has been started on request from Bundeswehr (German Armed forces) in 2002 or 2003, and this pistol is intended to become a companion to HK MP7 Personal Defence Weapon, which is also is under serious consideration for Bundeswehr, as well as some counter-terrorism forces in Germany and abroad. This combo (MP7 PDW and UCP pistol) apparently will become a major rival to already famous Belgian FN P90 PDW and Five-seveN pistol.

Like the Five-seveN pistol, the UCP is intended to provide accurate pistol fire, with high armor piercing capabilities, high accuracy, large magazine capacity and low recoil. To achieve those requirements, UCP uses special small-caliber, 4.6 millimeter ammunition, initially developed for HK MP7 weapon. This ammunition has a bottlenecked cartridge case and a pointed bullet with steel core, with relatively high velocity. The only questionable property of this ammunition is its stopping power, as the bullet is very small and thus could make any serious damage only if it will tumble or fragment on impact with human body.

So far not too much information is available on UCP. At the present time (November 2004) HK and Bundeswehr apparently started initial trials of the pistol, and more information probably will become available next year.

The UCP is a semi-automatic pistol with detachable magazine and polymer frame. Current prototypes feature a HK P2000-type grip with detachable backstraps of different size and configurations, and a Picatinny-type accessory rail under the barrel. The action of the gun is said to use some sort of retarded (or delayed) blowback system, but so far it is not known, if it is a roller-delayed blowback, as in HK P9s pistol, or a gas-delayed blowback, as in HK P7 pistol. The trigger unit in current UCP models is modular, and could be had in various configurations (DA/SA or DAO), with or without manual safeties. Standard magazine capacity is 20 rounds, and it is believed that the UCP will accept both 20- and 40-round magazines from HK MP7 PDW weapon.