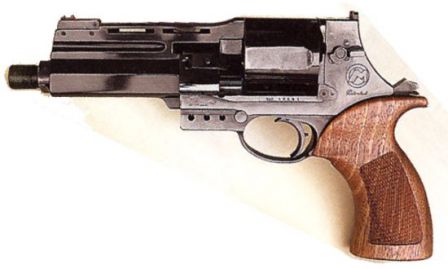 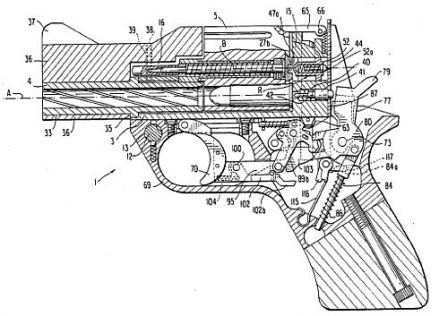 Drawing from original patent (US 4,712,466 to Emilio Ghisoni) which explains the basic design of Mateba Model 6 Unica auto-revolver

The Mateba Model 6 Unica is one of the more unusual modern weapons, combining the advantages and disadvantages of two different handgun types – semi-automatic pistols and traditional revolvers. The design is clearly based on the old vintage British Webley-Fosbery semi-automatic revolver, while the Mateba Model Unica adds several novel features to this old and relatively unsuccessful design. The Mateba Model 6 Unica auto-revolver was developed by Italian designer Emilio Ghisoni in the late 1980s, and put into limited production by the Italian company Macchine Termo Balistiche, now Mateba Srl. This basic design was developed in three calibers (and sizes), as well as in carbine versions, fitted with long 457mm (18″) barrels and shoulder stocks. Revolvers of the Model 6 Unica line-up are apparently still produced on a limited basis.

The Mateba Model 6 Unica auto-revolver utilizes a two-part frame, where the upper part is allowed to recoil on rails machined on the lower frame. The upper frame holds the cylinder and barrel; the lower frame hosts the trigger, hammer unit and grip. The six-shot cylinder swings to the left for reloading, but, unlike most revolvers, the cylinder crane axis is located above the cylinder (not below), so the cylinder swings up and to the left, instead of the more traditional down and to the left. Also, unlike most other revolvers, the barrel is located co-axially with the lower chamber in the cylinder (not upper). This is done to decrease muzzle flip by eliminating the leverage caused by having the bore above the operator’s holding point. Barrels are easily removable, with separate barrel jackets; therefore, barrels of various lengths can be installed on a single gun using a special wrench. Upon discharge, the upper frame recoils against its return spring, automatically cocking the hammer and rotating the cylinder. If necessary the revolver can also be fired for the first shot in traditional single or double action mode. Sights are adjustable, but again unlike most other guns, it is the front sight that is fully adjustable, while rear sight is fixed; this is necessary because the front sights are located on removable barrel shrouds.

Like its much older predecessor, the Webley-Fosbery semi-automatic revolver, the Mateba Model 6 Unica has the advantage of significantly reduced felt recoil. However, there are some serious penalties for that, as it is also somewhat heavier than traditional revolvers of similar caliber and barrel length, is more complicated and sensitive to proper grip during discharge (gripping it too weakly may produce failures to cycle the action through wasted recoil energy). Also, it is sensitive to weak and mild rounds that may generate insufficient recoil, in which case the gun will fail to cycle the action.