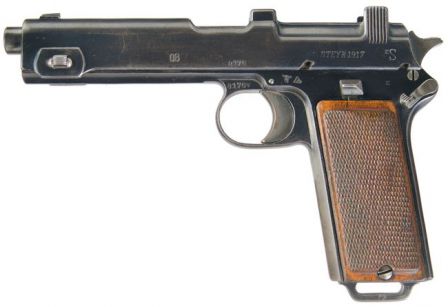 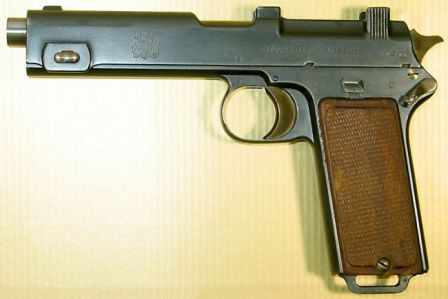 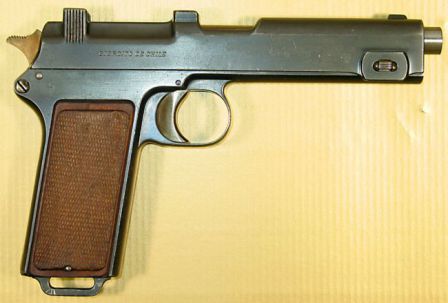 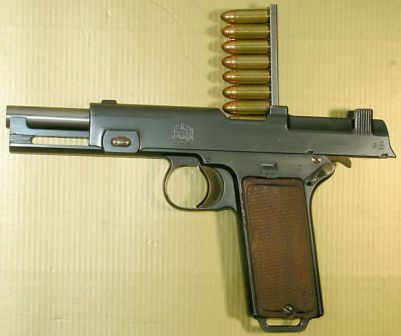 Steyr Hahn M1911 self-loading pistol, with clip inserted and cartridges ready to be pushed into the magazine. 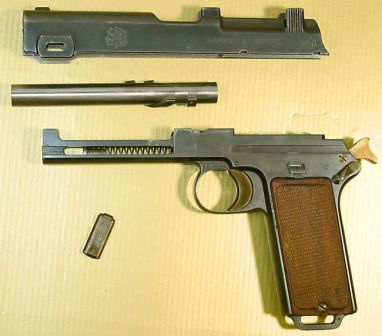 The Steyr Model 1911 / Model 1912 pistol can be best described as an evolution of the Roth M1907. It was designed in 1910, and entered production in 1911. First deliveries were made to Chile, designated as the Steyr Model 1911. The next year it was adopted by the armed forces of the Austro-Hungarian empire, and also by the Romanian military.

Significant numbers of these pistols were produced at the famous Steyr arms factory until the end of WW1, originally in 9×23 Steyr caliber. When Nazi Germany occupied Austria in 1939, many of these pistols were converted to fire 9×19 Luger (9mm P.Patr.08) ammunition. They were then issued to a variety of German 2nd line military troops and police. Such pistols were usually marked on the slide with “08” or “P-08”, to distinguish them from the original guns chambered for 9×23 Steyr ammunition.

During the First World war, the Steyr factory also produced a select-fire version of the M.12 pistol, with an enlarged magazine that held 16 rounds, a detachable shoulder stock-holster, and a fire mode selector on the left side of the frame. This allowed the pistol to fire single shots or in full automatic mode. This machine pistol was known as the M.12 / P.16.

The nickname “Steyr Hahn” comes from the fact that this pistol has an external hammer (Hahn in the German language), as opposed to the striker-fired Roth M1907 pistol.

The Steyr M1911 / M1912 pistol is a recoil operated weapon. It uses the short barrel recoil principle, with rotary barrel locking. The barrel of the gun has two sets of lugs. Two lugs on its top are used to lock into the cuts made on the underside of the slide. The bottom lugs are used to rotate the barrel upon recoil ( following the diagonal cut in the frame) and to limit the length of recoil.

The firing mechanism utilizes an exposed hammer with a single action trigger. The manual safety lever is located on the left side of the frame, above and to the rear of the left grip panel. It doubles as an automatic slide stop, locking the slide to the rear when the last cartridge is fired from the magazine. This also allows for comfortable loading and unloading.

Steyr M1911 / M1912 pistols use integral, non-detachable single stack magazines in the grip. These are loaded from stripper clips through the loading / ejection window on top of the slide. Magazine capacity is 8 rounds. This pistol is also equipped with a manual cartridge release, which allows the unloading of all cartridges from the magazine at once through the ejection port (slide must be locked back before this operation).