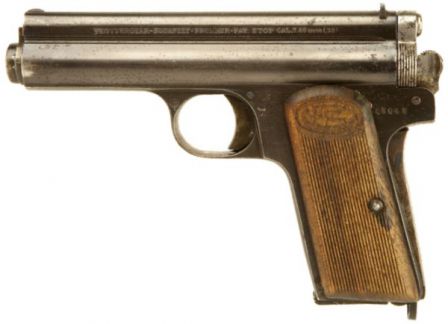 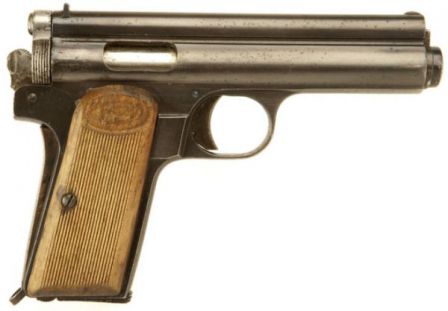 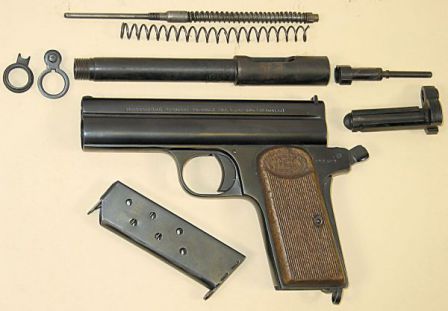 The Stop pistol was developed by Hungarian small arms designer Rudolf Frommer, and adopted by Honved (Hungarian army within the Austro-Hungarian Empire) in 1912. It was originally chambered for special 7.65mm Frommer cartridge, which was dimensionally similar to the 7.65×17 Browning / .32 ACP but loaded to provide more power. The 7.65mm Frommer Stop pistol will also function with standard 7.65×17 Browning / .32 ACP ammo, but reliability may suffer a bit. It must be noted that Hungarian military and police used Frommer Stop pistols mostly in 7.65mm caliber; the 9mm Short / Kurz caliber pistols were mostly intended for commercial sales. The Frommer Stop pistols served with Hungarian military and police until about 1945. This pistol was manufactured by Femaru factory in Budapest, Hungary, until about 1929. Total production of the Frommer Stop pistols is estimated at about 350-360 thousands.
It must be noted that Frommer Stop pistols were of rather complicated design, and required complicated maintenance procedures. On the other hand, these pistols were well built, robust, and provided proper maintenance and ammunition, functioned quite reliable.

The Frommer Stop pistol is long recoil operated, which is almost unique in its class. It uses rotary bolt locking with dual radial lugs that engage the barrel at its breech. Upon discharge, barrel and bolt recoil together within the stationary barrel jacket, compressing the coaxial return springs, located above the barrel, inside the barrel jacket. After the full recoil, the bolt carrier is stopped by the catch, and barrel returns forward under pressure of its own return spring, carrying the bolt with it. The forward movement of the bolt (relative to the temporarily stationary bolt carrier) forces the bolt to rotate (it has spiral guide ribs on its tail that engage respective spiral cuts in the bolt carrier), and unlock from the barrel. Once the bolt is unlocked, it remains stationary while the barrel returns to the forward position. The spent cartridge case also remains stationary, held at the bolt face by the extractor. Once the cartridge case is clear from the barrel, it is ejected through the opening on the right side of the barrel jacket. When barrel returns to its forward position, it automatically disengages the bolt catch, allowing the bolt carrier and bolt to move forward under pressure of the bolt return spring, chambering a frech round from magazine and locking the barrel at the end of the cycle. For manual cycling, the bolt carrier is provided with serrations on its wide rear end, which protrudes from the barrel jacket.
The trigger is of single action type, with exposed hammer. No manual safety is available, but the Frommer Stop pistol is fitted with automatic grip safety at the rear of the grip.
Feed is from detachable box magazines, with magazine release catch located at the base of the grip, behind the magazine well.