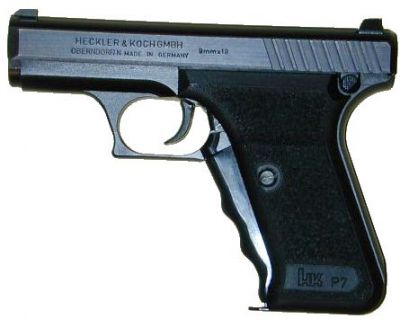 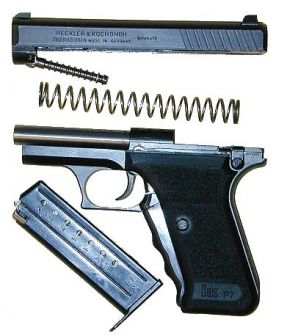 Heckler-Koch P7 PSP partially disassembled; the slide retarding piston can be clearly seen under the slide. 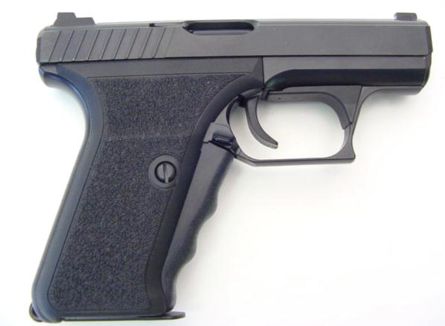 P7M8 Pistol. Note magazine release lever in the base of the enlarged triggerguard, as well as heat shield above the trigger. 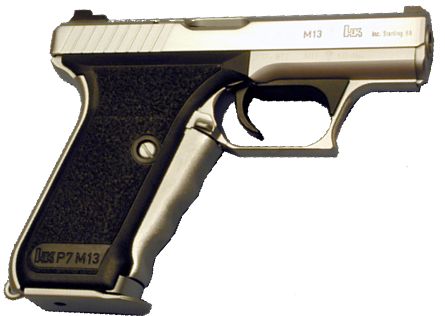 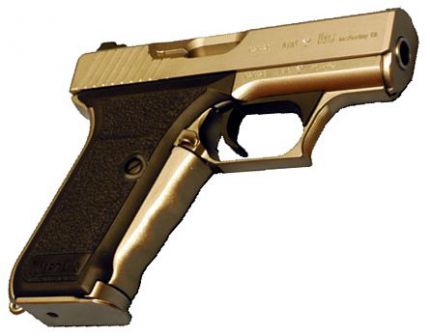 P7M10, with its thicker and heavier slide, necessary to safely fire the more powerful .40SW ammunition. Note the cut in the slide just behind the ejection port, necessary for reliable ejection.

The Heckler & Koch P7 Pistol was first introduced in 1976. The Heckler & Koch company began the process of developing a new selfloading pistol of compact size, with enhanced safety features in 1971. After several years of prototyping and experiments, HK finally released the PSP (‘Polizei Selbstlade-Pistole’ or ‘Police Selfloading Pistol’). It was intended for use by the West German Police, and consequently the PSP was adopted by several police departments, as well as Border police units as the P7.

Mass production of  the P7 started in 1979. By 1981 the Heckler & Koch company brought out an updated version of the P7, the P7M8. The M8 featured a magazine release relocated from the heel of the grip to the base of the trigger guard.  This was the replacement of the ‘European’ style set up with an ‘American’ one instead. With the P7M8 there was also an enlarged triggerguard and heat shield added inside the triggerguard. This heatshield was to protect the trigger finger from the hot part of the frame, containing the retarding gas cylinder.

The P7M8 was adopted by the New Jersey State Police (USA) and is still in use there (at the time of writing). The next version to be released was the P7M13, in 1982. This was a high capacity derivative of the P7M8, accepting double stack magazines with 13 rounds, instead of the 8 round single stack magazines in the earlier versions of the gun.

The latest production variant of the P7 breed is the P7M10, which appeared in 1991. This was a high capacity version chambered for the more powerful .40SW cartridge.

The experimental P7M7 Pistol was an attempt to chamber the P7 for powerful .45ACP ammunition. In order to accomplish that the gas retarded system was replaced by an ‘artillery like’ liquid oil recoil retarder. This version didn’t make it past the prototype stage, because of excessive costs and complexity.

A licensed copy of the P7M8 in 9mm is in production in Greece, known as the EP7  Pistol. The EP7 is the standard sidearm for the Greek military and police forces.

The P7 pistols are known for their low barrel axis and slim profile, which makes them an accurate and easily concealable pistol. Less so however, in the case of the bulkier P7M10. They are also somewhat expensive, but have a strong following among the shooting fraternity.

P7 pistols are built around a retarded blowback system, based on the WW2-era Barnitzke system. In this system some of the powder gases are redirected from the barrel, via a small port near the chamber, into the gas cylinder under the barrel. There the pressure acts against the gas piston, attached to the slide, thus slowing down the slide opening until the pressure in the barrel drops down to a safe level.

This system accounts for the stationary and low mounted barrel, which helps to maintain the compact size of the gun and great accuracy. On the other hand, such systems are somewhat sensitive to bullet types and powder types, and require more complicated and frequent cleaning than most recoil operated guns of the same class. Another interesting feature of the P7 pistol is its trigger system. The P7 uses a striker fired mechanism, which is cocked for the first shot by depressing the large cocking lever at the front of the grip. For all subsequent shots, the striker is cocked automatically as the slide recoils. As soon as the grip and the cocking lever are released, the striker decocks automatically. Because of this, the P7 has no manual safeties and is designed to be safely carried with a round in the chamber. To open fire, one must simply grip the gun securely and pull the trigger.

The P7 is an all-steel design. Early P7 / PSP pistols featured a magazine release in the heel of the grip. With the introduction of the P7M8, all P7 type pistols featured the magazine release button at the base of the triggerguard, as well as enlarged triggerguard and heat shield above the trigger. P7 and P7M8 pistols have single stack, 8 round magazines. P7M13 and P7M10 pistols have double stack magazines holding 13 rounds of 9mm or 10 rounds of .40SW ammunition respectively.