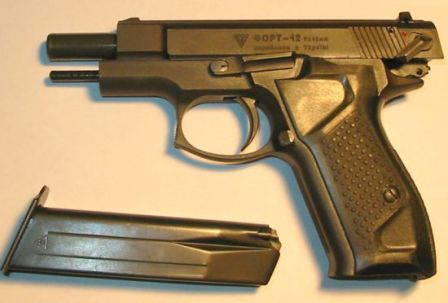 Fort 12 pistol in the presentation finish 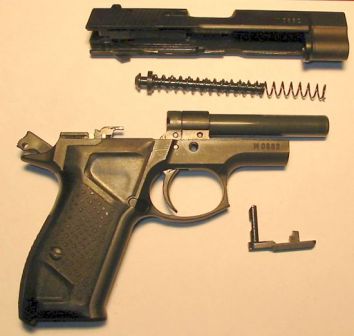 The Fort 12 pistol is an attempt of the independent Ukraine (one of the former USSR republics) to develop its own police pistol to replace Soviet era, aging Makarov PM pistols. To accomplish this task, Ukrainian state-owned FORT factory purchased Czech machinery from CZ-Uhersky Brod factory, and by the late 1990s developed its first pistol, the Fort 12. Currently, this gun is issued to the Ukrainian police and security forces and also sold on civilian market chambered for non-lethal rubber ammunition or tear gas ammunition. early production Fort 12 pistols were reported as only marginally reliable, but at the present time most of the teething problems are gone, and Fort 12 pistol provides some improvements over the older Makarov PM in the ergonomics, accuracy and magazine capacity. The only visible minor flaw of the Fort 12 design is the lack of the safe decocking facility.

The Fort 12 is a blowback operated, double action pistol. Frame and slide are made from steel. Manual safety is mounted on the left side of the slide only, and locks the hammer either in cocked or in lowered position. Guns are manufactured in standard grade with mated finish, or in presentational grade, with gold inlays and engravings. Magazine is of double column type, and holds 12 rounds of ammunition, magazine release button is located at the base of the trigger guard, on the left side of the frame.