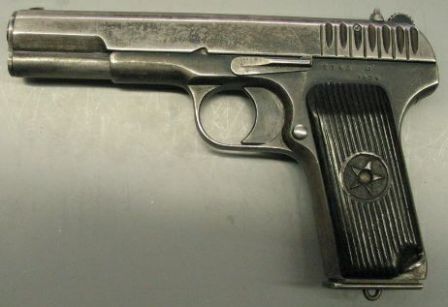 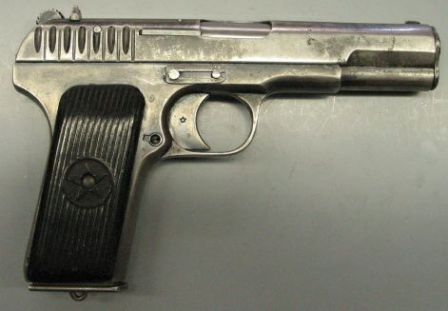 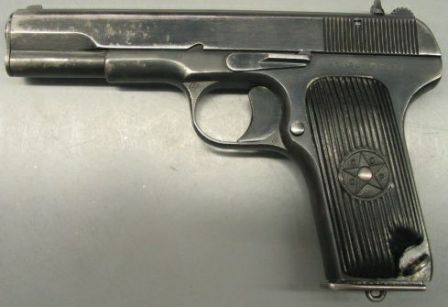 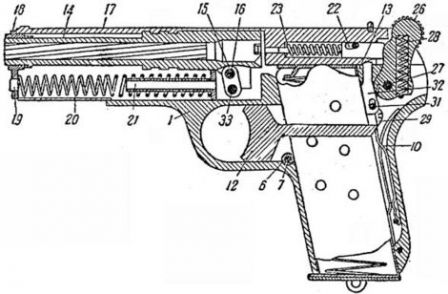 The Tokarev TT ("Tula, Tokarev") pistol was developed as a result of continuous trials, held by the Red Army in the mid- and late 1920s. Red Army looked for a new, modern semiautomatic pistol to replace obsolete Nagant M1895 revolvers and a variety of foreign semi-automatic pistols. One of the most popular foreign handguns, purchased in numbers during 1920s, was the famous Mauser C96, and the Red Army really liked its powerful 7.63mm cartridge, which, in slightly modified form ,selected for its future pistol of domestic design. Red Army tested several pistols of various designers, and in 1930 eventually selected the design of the famous Russian arms designer, Fedor Tokarev. During 1930 – 1932 Red Army procured several thousands of new pistol, and after initial field testing requested several improvements, which resulted in the adoption of the model 1933 Tokarev pistol early in 1934. This pistol was manufactured in increased numbers prior to the Great Patriotic War. Before July 22, 1941, about 600 000 TT-33 pistols were delivered to Red Army. During war pistols were made in increasing numbers. In 1946 the TT was slightly modified to cut production costs, and its manufacture in USSR finally ceased circa 1952, with the adoption of the more modern 9mm Makarov PM pistol. However, TT served with the Soviet Army well until 1960s, and with the Soviet Militia (Police) – until 1970s. During late 1940s and 1950s USSR also supplied some of its new allies from Warsaw pact with licenses to manufacture TT, and it was produced in China, Hungary, North Korea, Poland, Romania and Yugoslavia, in more or less original forms. Most military TT pistols of non-Soviet manufacture were also in 7.62mm, with some commercial export versions available in 9x19mm Luger, and fitted with some sorts of manual safety.

For its time Tokarev TT was a formidable weapon, with good penetration and effective range. It was of good reliability and easy to maintain. What it lacked most was the manual safety, and its grip shape was not too comfortable.

The Tokarev TT is a short recoil operated, locked breech pistol. It uses Browning swinging link system, borrowed from the Colt M1911 pistol, modified to simplify production. The single action trigger had no safeties, other than disconnector to prevent out-of-battery fire, and a half-cock notch on the hammer. The only safe way to carry TT was to always have an empty chamber. The hammer unit was made as a single unit, easily detachable for cleaning and maintenance. Some years later Swiss designer Charles Petter developed similar system for the French Mle. 1935 pistol. Steel magazine held 8 cartridges. Fixed sights were factory zeroed for 25 meters. Grip panels were usually made of plastic or wood (wartime production).