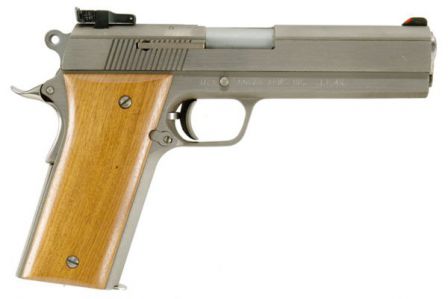 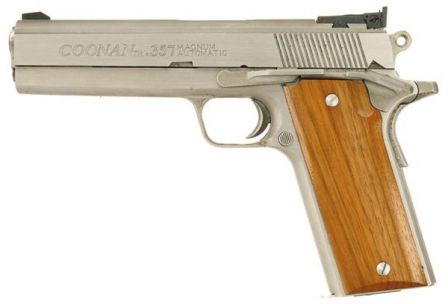 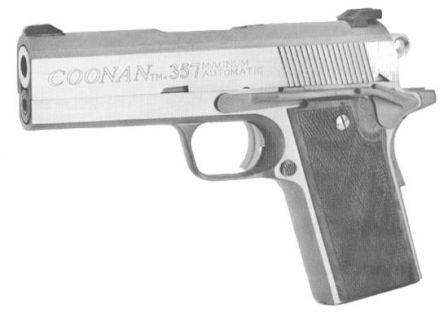 Dan Coonan, an American gun designer, started the development of a .357 Magnum caliber semiautomatic pistol in around 1977. He did so in the search of combat / defensive pistol that will provide same terminal effectiveness as .357 caliber revolvers, but with bigger capacity and faster reloading, specific to semiautomatic pistols. He first designed a working magazine (not a simple thing assuming the relatively large overall length and a rimmed case design of a .357 Magnum round). Once magazine was ready, Dan Coonan built his first forking prototype using standard M1911 parts; to be able to fit long .357 cartridges, he had cut the slide and the frame (in the grip area) and welded in steel inserts to increase length of parts. First Coonan .357 Mag barrel barrel was made from solid block of steel. Once prototype pistol was finished and successfully tested, Coonan established its own business, Coonan Arms Inc., and started to make pistols of his design. Through the time, basic design was upgraded to Model B, with major improvement being the introduction of the linkless barrel system. During early 1990's Coonan introduced a cut-down "Cadet" model with shortened barrel and grip; at about the same time he also worked on .41 Magnum caliber pistol, which apparently was never finished. Coonan arms also offered .38 Special +P caliber conversion kits, which included weaker return springs and magazines with spacers, which were necessary to firmly hold shorter rounds.
In the year 1994 Coonan Arms Inc went filed bankruptcy, and in the same year  it was reorganized and lived on until 1998, when it was dissolved. At the present time, parts and repair service for Coonan pistols are offered by Dan Coonan Inc. Coonan pistols are out of production and no longer made.
Overall, Coonan pistols were fine weapons, suitable for most applications like self-defence (including concealed carry), service use by police officers, hunting, target shooting. These pistols were made to rather high standard and thus were somewhat expensive.