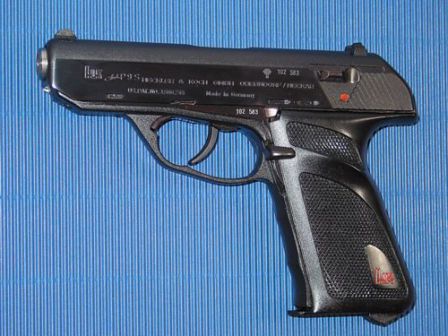 HK P9S pistol. Note the heel magazine release and a cocking/decoking lever behind the triggerguard. 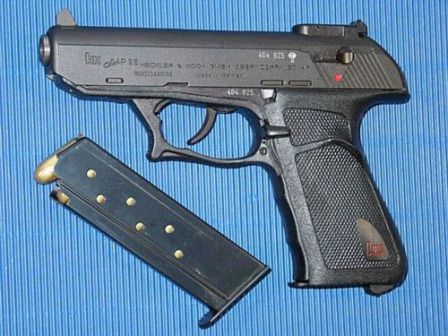 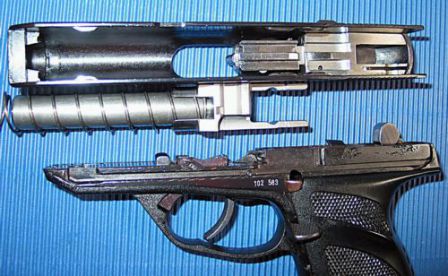 HK P9S partially disassembled. clearly seen are the barrel with its extension and cuts for rollers; and a separate two-part breechblock, inserted into the thin-walled slide.

The P9 pistol was designed by the famous Heckler-Koch company during the first half of the 1960s. After much testing and prototyping, which even included a selective-fire pistol with detachable shoulder-stock, the mass production of semi-automatic P9 began in 1969. Not many of single action P9 pistols were produced, and during the early 1970s the P9 gave its way to the double-action P9S, which remained in production until 1978. The licensed version of P9S is still manufactured in Greece as EP9S (9mm only). The P9 was and probably still used by various police forces in Germany, as well as in several other countries. The .45 caliber version of P9S, fitted with longer barrel which accepted the detachable silencer, was used in limited numbers by US Navy SEALs.

The P9S is an interesting design, which is based on H-K experience, gained with production of famous G3 rifle. First, the P9 and P9S use the stamped steel frames and slides, with machined steel inserts and polymer triggerguard and front part of the grip, as well as polymer grip panels. This accounted for fast and inexpensive production. Second, the P9 and P9S featured a roller retarded (delayed) blowback action, also derived from G3 rifle. This action required a two-part breech block, machined from steel, which was inserted into stamped slide, and a machined barrel extension, with roller grooves. The stationary barrel accounted for consistent accuracy, and allowed for easy and reliable silencing of the pistol. Another interesting feature of P9 pistols was the internal (concealed) hammer, which operated in single action mode in P9 and in double action mode in P9S. The special lever, located at the left side of the grip frame, just behind the triggerguard, was used to manually cock and decock the hammer. The manual safety was located at the left side of the slide.

P9S pistols were fitted either with fixed or adjustable sights (P9S Sport model). The later also could be had with longer barrel and special target grips.

Single stack magazine of P9S held 9 9mm or 7 .45 caliber rounds, magazine release was located at the heel of the grip. Slide stop lever was located above the cock/decock lever.