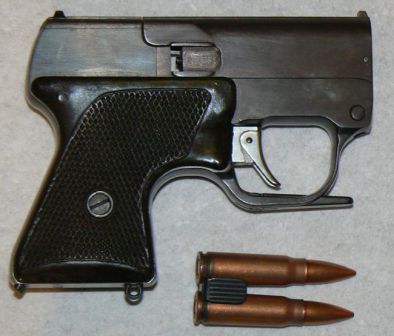 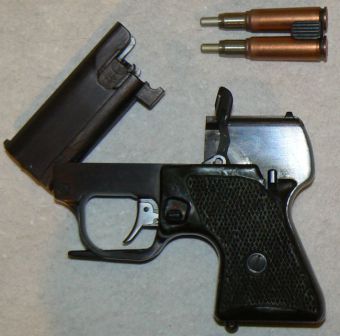 MSP pistol, left side. Barrel cluster is opened for reloading, and a clip with two fired SP-3 cases is shown 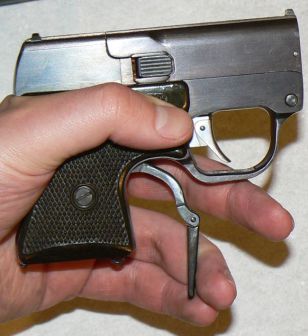 Cocking the internal hammers of the MSP pistol

In 1972, both the KGB and the Soviet Army adopted the “silenced weapon complex” that included the 7.62mm SP-3 ammunition and the MSP two-barreled, derringer type pistol. The MSP was intended to partly replace (and partly complement) the larger S4M pistol of the basically similar design, which fired much more bulky and heavy PZAM ammunition of the same caliber.

The MSP (Malogabaritnyj Spetsialnyj Pistolet – small special pistol) is one of the very rare, truly silent pistols – when it is fired, the only sound it produces is the quiet “click” of a firing pin. Yet, this pistol has no silencer, as every specially designed cartridge has an integrated silencing feature in the form of a gas-sealing piston that pushes the bullet and then locks the powder gasses within the strengthened case. The pistol is of a very compact and slick design, as it is intended for concealed carry and surprise use. It is of two-barrel derringer type, with tip-up barrels. For loading and unloading, two special rimless cartridges are loaded into a special steel clip, and then inserted into the open barrels. There are no extractors nor ejectors, as spent cartridge cases or unfired rounds are removed from the barrels by pulling the clip out of the gun manually. This ensures that no cases are left at the scene. The trigger is single action, with concealed hammers which are cocked by a separate lever which protrudes forward from the trigger-guard and must be pulled down to cock the gun. Once the barrels are loaded and closed, the shooter pulls this lever down to cock the hammers and then releases it. Once the pistol is loaded and cocked, the manual safety can be engaged via a lever set into the left grip panel behind the trigger. The crude sights are fixed and this pistol is intended for close range only, as the muzzle velocity is only about 200 metres per second.