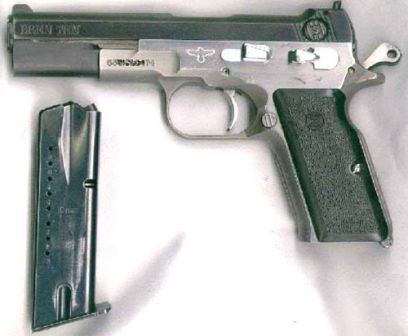 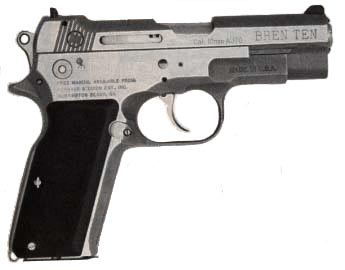 The Bren Ten Pistol was developed by the short lived American company Dornaus and Dixon in 1983. The partnership was lucky enough to have the famous firearms trainer and competitor, Colonel Jeff Cooper as an advisor and mentor, and he had a big influence on its design.

It was manufactured until 1986 when that company closed its’ doors and it was the only product they produced during their tenure. The Bren Ten’s premier claim to fame is that it is the first factory manufactured handgun to be chambered for the powerful 10mm auto cartridge, developed by Norma, the Swedish Ammunition manufacturer. The 10mm round was intended to compete with the .45ACP and 9mm Luger rounds for energy delivery and combat effectiveness. The reduced size of the 40mm compared to the .45ACP also meant that the magazine could accomodate 10 rounds instead of the standard 7 for an M1911 magazine. So the Bren Ten, overall represented a step up in the evolution of tactical effectiveness.

It was also adept for close combat in that it could be kept in ‘condition 1’, that is to say, ‘one in the chamber, hammer cocked, safety on’. Allowing for faster deployment during military combat or similar operations.

The design of the Bren Ten strongly resembles the famous the Czech CZ-75 handgun, which in turn is based on the Browning M1911. The Bren Ten has a distinctive manual safety system. The main manual safety is on the left hand side above the pistol grip, in a comfortable position for activation by the shooter’s thumb. This was a feature added specifically on advice from Colonel Cooper. The other safety feature is the button safety, indented into the slide, just forward of the hammer. This, potentially hard to find feature would lock the sear, allowing the slide and the trigger to still operate. Unfortunately it was possible to activate this safety accidentally, so it was not ideal.

The most interesting aspect of the Bren Ten is its cartridge. It was developed to be a better performer than the .45ACP and 9mm Parabellum rounds. The 10mm auto roughly equals or even slightly superceeds the .357 magnum cartridge – probably, the best handgun manstopper ever. It was adopted by the U.S.A. FBI as a more powerful replacement to 9mm Luger. With a relatively light (155 gr / 10.5 g) bullet, the 10mm can achieve muzzle velocities of 1350 fps / 410 m/s, giving to the shooter good penetration ability and a flat trajectory. However, the felt recoil could be at least considered to be “sensitive”.