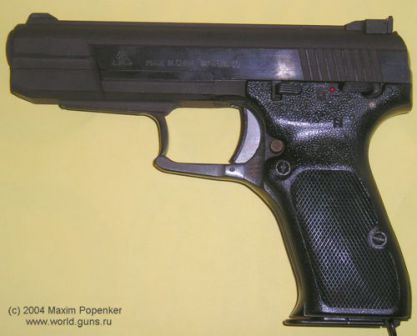 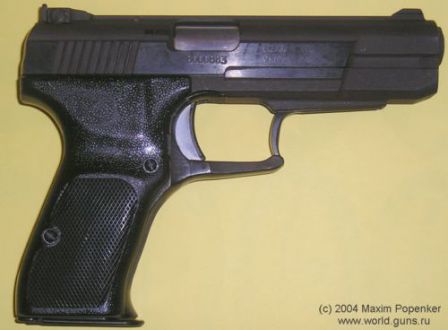 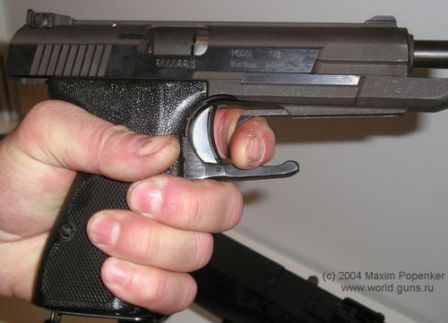 The Model 77B (M 77B) pistol is made by Chinese state arms factories and is exported by the NORINCO (China North Industries Corp). The M 77B pistol is apparently based on the Type 77 pistol, used by PLA and Chinese Police. However, the M 77B is bigger and heavier than Type 77 pistol. M 77B fires a much more powerful 9mm Para ammunition instead of 7.62x17mm Type 64 ammunition, used in Type 77 pistol. To safely handle powerful 9mm cartridges, M 77B pistol uses a gas retarded (delayed) blowback action with fixed barrel. Overall gas system is similar to one found in H&K P7 PSP pistol, with the gas cylinder, located under the barrel, and the gas piston, connected to the slide. The M 77B pistols are apparently not in use with any Chinese force, police or military, and intended for export. The M 77B is somewhat too bulky and heavy for a nine rounds magazine capacity, and fit and finish can be described as marginal at the best. The almost unique finger-cocking system (which in fact is forgotten elsewhere in the world for almost 90 years) is hardly useful, as it requires a lot of force and a very long index finger to operate it rapidly. NORINCO also offers two modified versions of the M 77B, designated as NP 20 and NP 24. The former is quite similar to M 77B except for it does not have a finger cocking, and the trigger guard is solid; the latter pistol also features a 15 rounds high capacity double stack magazines.

As said above, the M 77B is a retarded blowback operated pistol with fixed barrel. The opening of the slide is retarded by the pressure of the gas, bleed from the barrel into the cylinder below it. The striker-fired mechanism is single action, with frame mounted safety on the left side of pistol. Frame and slide are made from carbon steel, grip panels are polymer. Front sight is fixed, the rear sight is adjustable for windage and elevation. The finger cocking mechanism consists of the front part of the trigger guard, which is mounted on the slider. To cock the pistol (cycle the slide) single-handed one must pull the front of the trigger guard by the index finger and then release it. For me it was way too much effort to bother with.