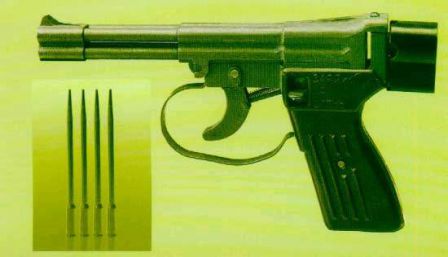 The SPP-1 underwater pistol (Spetsialnyj Podvodnyj Pistolet = Special Underwater Pistol) has been developed in late 1960s by the TSNIITOCHMASH organization on request from the Soviet Navy. The SPP-1 underwater pistol was intended for Soviet combat divers (“frogmen”). Later the SPP-1 has been modified to SPP-1M, with several internal upgrades, and is still used by Russian Navy special forces, as well as offered for export through Russian Governments’ military sales organization, RosOboronExport.

SPP-1M underwater pistol is a non-automatic, manually operated handgun with four barrels. Barrels are hinged to the frame in the same manner as on break-open shotguns. For reloading, barrel cluster is tipped to expose chambers, and four cartridges are inserted into barrels. To speed up ejection and reloading cycle, cartridges are loaded using flat clips, made from steel. The double-action trigger unit consists of a striker, mounting on a rotating base, so during the each trigger pull the striker is cocked and simultaneously rotated to the next, unfired barrel. The single lever, located at the left side of the frame, controls the safety and reloading. It has three positions, top for “Reloading” (barrel release), middle for “Safe” and bottom for “Fire”.