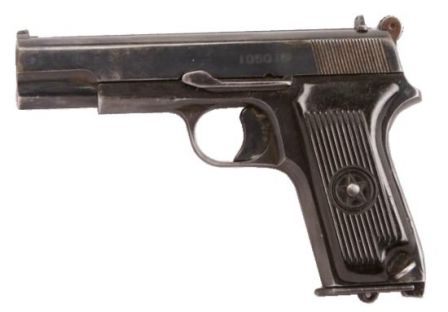 This pistol has been developed at state arms factories of  DPRK by late 1960s, and is now in use with North Korean army. It is based on Soviet Tokarev TT, but with certain modifications. This pistol is rarely seen outside of DPRK.

Type 68 pistol is a short recoil operated, locked breech pistol. It uses a modified Browning type locking, with the barrel engaging the notches inside the slide with two lugs, machined on the top of the barrel. To lock and unlock upon the recoil cycle, breech end of the barrel is controlled by the cam-shaped cut in the underbarrel lug (instead of the swinging link, found in the original TT pistols). Trigger is of single action type, with exposed hammer. There is no manual safety, except for a half-cock notch on the hammer. Single stack magazines hold 8 rounds, and are slightly different from TT magazines, by not having the notch on the left side for a TT-type magazine catch. The magazine catch is located at the bottom of the grip. Standard TT magazines still can be used in Type 68 pistols, but not vice versa. Sights are of fixed type, with the rear sight dovetailed into slide.