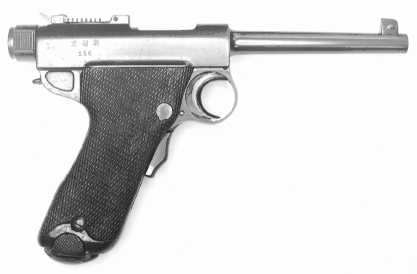 Nambu Type "A" pistol, also known as Type 04. A predescessor to the Type 14. Note automated grip safety under the triggerguard and a range ajustable rear sights, which disappear from design in the Type 14. 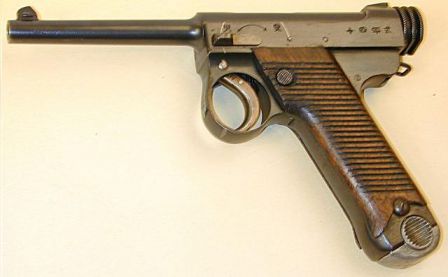 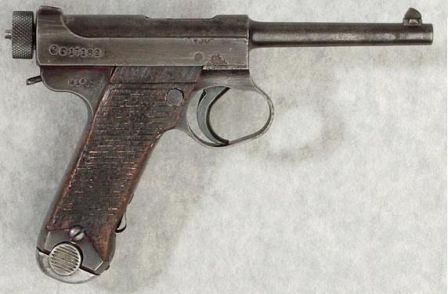 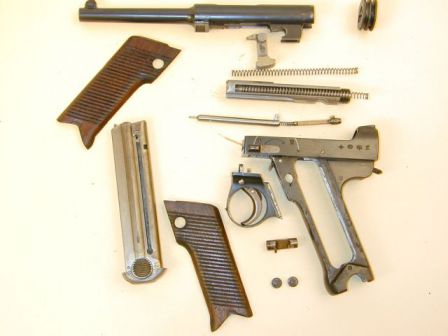 The type 14 pistol was designed by Japanese general Kijiro Nambu circa 1925 (14th year of the Taisho emperor, hence the official designation), as an iprovement over the earlier pistol of his design. This pistol was adopted by Imperial Japanese Army and widely used during all S-E Asia campaigns and through the World War 2 as a standard Army sidearm.

Type 14 is a recoil operated, locked breech pistol. It featured a short recoiling barrel with the bolt, moving inside the cylindrical barrel extension. The barrel to bolt lock is achieved by the vertically tilting locking member, which is cammed down after the short recoil of the barrel, stopping the barrel and releasing the bolt to complete the ejection and reloading cycyle. The bolt has two symmetrically located recoil springs and a knurled knob at the rear for manual operation. Pistol is striker fired, with single action trigger and manual safety on the left side of the frame, above the trigger. Interestingly enough, the triggerguard with the trigger can be removed from the fun for clearing and maintenance when gun is field stripped. Type 14 Nambu pistol uses single column magazine that holds 8 proprietary bottlenecked rounds of ammunition. Gun has fixed sights and a belt loop at the rear of the frame, above the grip. It can be said that the overall design of the Type 14 was inspired part by the P08 Luger (overall shape) and part by the C-96 Mauser (locking system), but owerall design is quite original. Late production pistols, made in the 1940s, can be distinguished by the enlarged triggerguard that allowed the pistol to be used in winter gloves. These pistols also featured additional magazine retention spring mounted in the front strap of the grip, to avoid magazine loss during the use of the pistol, ans simplified bolt knob.