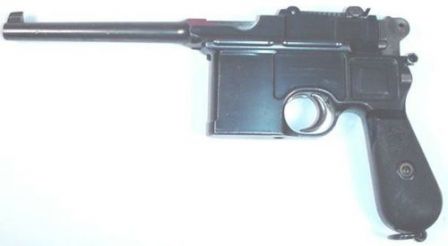 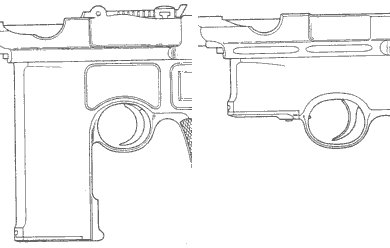 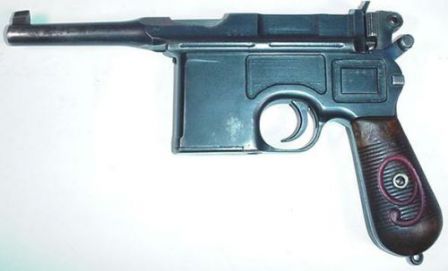 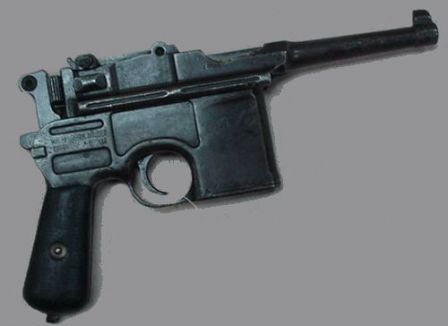 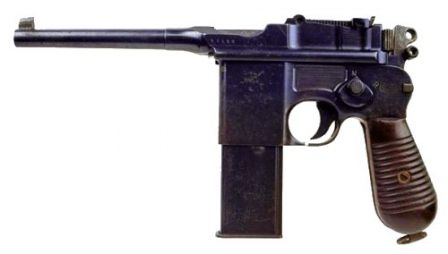 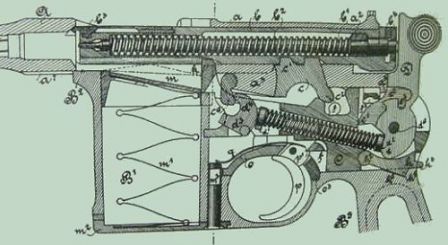 The development of the C-96 began in 1893 or 1894. Most work had been done by the Federle brothers, who worked for the Mauser company. Final design appeared early in 1895 and had been patented by Paul Mauser. Production began in 1896. The C-96 had been offered for the German Military but failed. However, C-96 has a long and sucessfull story on the civilian market – being offered as a pistol-carbine, it outperformed in effective range most of contemorary pistols and revolvers, being especially popular with travelers and hunters in the areas where big animals are rare or absent at all. C-96 first saw military action during the Boer war in South Africa (1899-1902). During the First World War C-96 had been aquired by the German Army due to the lack of the stantart issue Luger P-08 pistols. It also had been used during the World War Two, by some second line troops of the Reichswehr (German Army). C-96 also had beeen widely exported – in the 1920s Soviet Russia purchased large quantities of the short-barreled (99 mm barrels) C-96s in 7.63mm, givint the name "Bolo-mauser" (from Bolsheviks' Mauser) to all short-barreled C-96s. In 1930s China also purchased lots of the C-96s in 7.63mm, and also manufactured copies of the C-96 but chambered for .45ACP cartridge. Surprisingly, these copies were of quite good quality. Many C-96 clones were manufactured in Spain, mostly withouth any license, and mostly by the Astra. In the early 1930s Mauser engineers developed a select-fire version of the C-96, which had been used in limited numbers during WW2.

Technically, the C-96 is a recoil operated, locked breech, semi-automatic pistol. It uses short recoiling barrel with bolt, located inside the large barrel extension. The bolt and barrel are locked by the vertically tilting locking piece with two lugs, that locked into the recesses on the bottom of the bolt. The gun is hammer fired. Early guns had hammers with large, round shaped hammer headss with coned sides. The safety is located at the left side of the hammer and locks the hammer when engaged. The most recognisable feature of C-96 is a non-removable, fixed box magazine, located ahead of the triggerguard. Early models were made with 20, 10 or 6 round magazines, but soon 20 and 6 round models were dropped, and since 1905 or so only 10 round models werere manufactured. C-96 can be loaded with single rounds or from 10-rounds sripper clips. The only way to unoad the magazine was to work the slide all the way back and forward for each cartridge in the magazine. Two other notable features were the distinguishable shaped handle (which give the name "broomhandle" to all C-96s) and removable wooden shoulder stock/holster. Finally, most of the C-96 were fitted with ajustable rear sights, graduated up to 1000 meters. This, obviusly, was more of marketing feature, since at 1000 meters distance the average bullets spread was about 4 meters, but, due to high velocity ammunition (the 7.63mm Mauser round produced muzzle velocities of about 440 meters per second, or 1450 feets per second), the effective range was about 150 or 200 meters, especially with shoulder stock atached.

The C-96 took its final shape in 1912, when new type of safety (marked NS – "Neue Sicherung") was adopted, along with shorter and wider extractor and smaler and lighter hammer. In 1915, due to World War, German Army purchased from the Mauser some 150.000 C-96s, chamberd for the army standart issue 9x19mm Luger/Parabellum round. These guns were marked with large red "9" digits on the both sides of the grip. In the 1931-32 Mauser engineers developed two latest versions of the C-96 – models 711 and 712. Main difference of these models was the adoption of the removable box magazines for 10 or 20 rounds. The Model 712 also featured a fire selector mechanism with the fire mode switch on the left side of the frame. Due to the high rate of fire in full auto (1000 rounds/minute) and light barrel, the full auto could be used with any practical effect only for short time and only with shoulder stock attached. These guns were used in limited quantities by German Army in Second World War.

In general, the C-96 is one of the most distinguishable semi-auto pistols in the history, also one of the first practical designs in its class. It was too heavy and too bulky, and slow to reload, but offered great effective range and firepower, along with good reliability. In short – it is what we usually call CLASSIC.