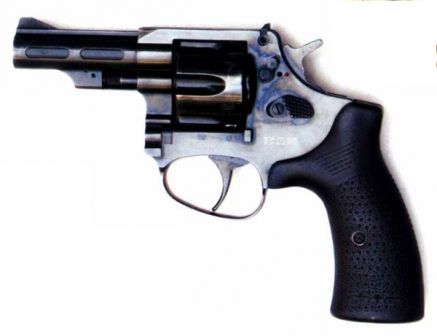 This new 9mm Chinese police issue revolver appeared in 2006. As of 2014, this revolver has been designated as the ‘Norinco NRP9’. It was intended as the future armament for various elements of the Chinese Police that were previously unarmed – such as traffic police, local municipal police etc.

Since the proposed users are mostly unfamiliar with modern small arms, its a reasonable idea to issue the weapon which is the most simple to use – that is, the double action revolver. The ammunition for it, which is apparently based on an old and rather anemic .38 S&W (9x20R) round, retains enough muzzle energy to pose a threat to any unprotected low-grade criminal at short range.

Even if this gun fell into the wrong hands, standard police body armor will be enough to stop that bullet. The muzzle velocity for the standard round is given as 220 m/s (720 fps). No bullet weights are given, but we can expect this round to be similar ballistically to .38 S&W, thus having muzzle energy of around 220 Joules (160 Ft-Lbs). Other than a standard round with a jacketed or JHP bullet,’less-than-lethal’ rounds with rubber bullets are provided for crowd control.

Mechanically, this new revolver is of rather conventional design, with a double-action trigger and swing-out cylinder. The firing pin is mounted in the frame, and a coil mainspring is located in the grip frame. The barrel is enclosed in a separate jacket, styled after American Dan Wesson revolvers.

The most unusual thing about this revolver is the additional manual safety lever, which is located on the left hand side of the frame, above the cylinder latch. Apparently, this safety blocks the firing pin. The sights are of open type, with the rear sight blade being adjustable for windage.