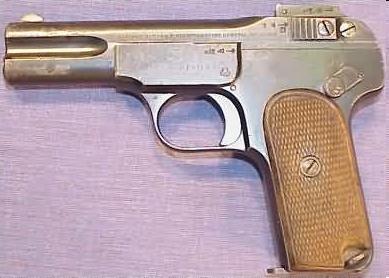 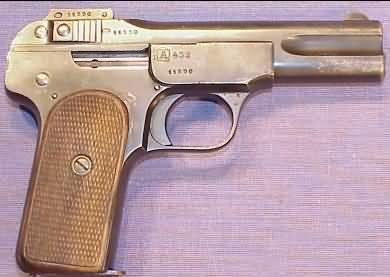 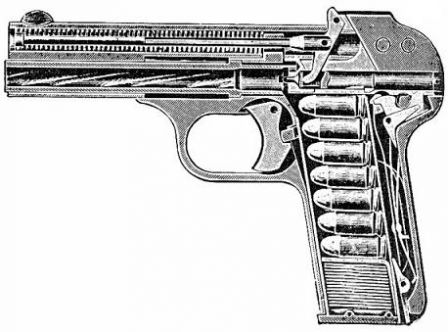 The FN Browning Model 1900 Pistol was the first of a long and extremely successful series of Belgian made pistols designed by the American firearms genius John Moses Browning. This model, the first semiautomatic, blowback operated pistol in history was designed by J. M. Browning in 1896 and later improved in 1897.

He offered his improved design to the Belgian company FN Herstal in 1898, and production began in 1899. At that time it was designated as the ‘Modele 1899’.

In 1900, this pistol, though in a slightly modified form, was adopted in Belgium as the ‘Mle.1900’. The slight modification was a shortened barrel, from 122 to 102 mm. This weapon proved to be relatively simple and well designed and is also known as the Browning Number 1 Pistol (Browning No.1).

It found wide use across Europe as a civilian and police sidearm. It was chambered for the new smokeless round, 7.62x17mm SR, which is also known in America as the .32ACP (.32 Colt Automatic). The FN Browning M1900 was widely copied in many countries, especially in South East Asia. It was manufactured until 1911 or so, with more than 700,000 pistols produced.

The M1900 is a blowback operated, semi-automatic (self-loading) pistol. The barrel is fixed to the frame. The recoil spring is located within the slide and above the barrel. This spring also acts as a firing pin spring with the aid of a special lever. M1900 is a striker fired, single action weapon. Unlike all later designs, the ejection port is cut into the frame, and not the slide. A safety switch is located on the left side, above the grip panel. The magazine is removable, inserted into the pistol handle and holds 7 rounds. The magazine catch lever is located at the heel of the grip. Sights are fixed.