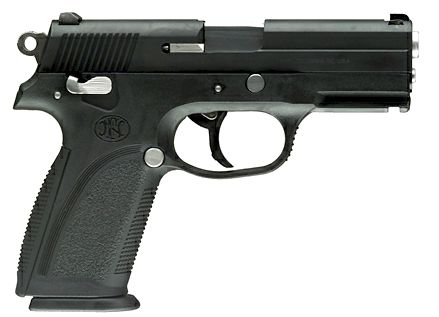 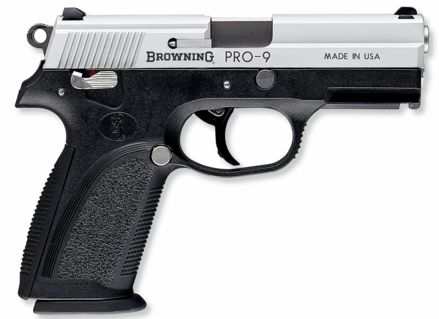 The same pistol in civilian guise, marketed as the Browning PRO-9.

The FNP-9 is a development of the famous Belgian company FN Herstal. First announced in 2003, the basic design is available in two versions. The Law Enforcement / Military version is marketed as FNP-9, and has a matte black finish. The Civilian version is marketed as the Browning PRO-9, and has a bead-blasted stainless steel finish on the slide. Frames on all models are constructed from black polymer.

These pistols are produced at two facilities – for the European market, at the FN home factory in Herstal, Belgium. For the US market manufacturing takes place at the plant in Columbia, South Carolina. In the States, business is conducted by FN Manufacturing Inc, a subsidiary of FN Herstal.

By modern standards, the FNP-9 / PRO-9 is a fairy conventional gun, suitable for police / security duties, as well as for general self-defense. Actually, the FNP-9 is a thoughtful compilation of previously known design features, including the now-common polymer frame, SIG-Sauer-style locking (de-cocking) system, and interchangeable grip backstraps, as pioneered by Walther. FNP-9 is quite comfortable and apparently very reliable. It will also probably be more successful in the marketplace than the previous FN polymer-framed pistol, the Forty-Nine.

The FNP-9 is a short recoil operated, locked breech pistol. The barrel is operated using the Browning cam system, and is locked to the slide by single lug via a large ejection port. The frame is made from high impact-resistant polymer. The Double Action trigger system with exposed hammer has an internal firing pin safety, with decocking levers located at the both sides of the frame. A firing pin safety is standard, and the magazine safety is optional.

The trigger / hammer module is formed as a single unit, easily detachable from the frame for inspection, maintenance or replacement. Optional hammer units can be found in DAO variety or in the standard DA version but with manual safety / decock levers instead of the basic decock-only levers. Other easily replaceable units include the barrel cradle / slide rail module and the grip backstraps.

Grip backstraps are available in two variations, straight or curved. The front part of the frame under the barrel is formed as an integral accessory rail for a flashlight or laser sight. Standard sights are provided with white inserts and are dovetailed into the slide.