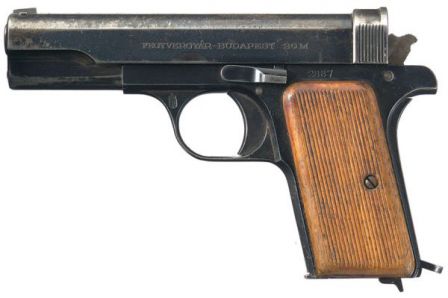 The FEMARU Model 1929 (29M in short) pistol was developed by Hungarian arms designer Rudolf Frommer to replace the overly complicated and expensive Frommer Stop pistol in Hungarian military service, and adopted by Hungarian Army and Air Force in 1929. About 50 000 of Frommer 29M pistols were produced at FEMARU factory in Budapest prior to 1937, when it was replaced in production with an improved design from the same master, the Frommer 37M pistol.

The FEMARU Model 1929 / Frommer 29M pistol is a simple blowback operated weapon. It has a separate breech block, which is inserted into the slide rather than made integral with it, as done in most pistols. The cocking serrations are provided on the enlarged rear part of the breech block, which projects from the rear of the slide. When gun fires, the breech block cycles along with the slide as one unit. The return spring is located below the barrel and the barrel is attached to the frame with four lugs below the chamber area, and can be easily dismounted when gun is disassembled. When gun is fired, barrel remain stationary.
The trigger is of single action type, with exposed hammer. No manual safety is available, but the Frommer 29M pistol is fitted with automatic grip safety at the rear of the grip.
Feed is from detachable box magazines, with magazine release catch located at the base of the grip, behind the magazine well. External slide stop lever is provided at the left side of the frame.