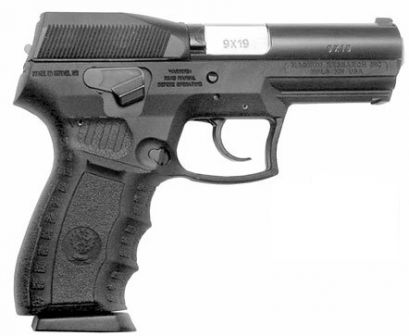 The "Barak" ("Lightning" in Hebrew) pistol was developed by famous IMI (Israel Military Industries, now IWI – Israeli Weapon Industries Ltd) company by the 2002. Originally intended as a military pistol for Israeli Defense Forces (IDF), the "Barak" was apparently supposed to replace in Israeli service the older Jericho pistols of domestic origins, as well as Glock pistols, quite popular in Israel. So far the future of "Barak" as an IDF service pistol is uncertain, and in the meanwhile IMI decided to bring this pistol to international market. It became available in Europe early in 2003, and in USA by the late 2003. In Europe it is still known as "Barak", and in USA it is known as Magnum Research SP-21 (Magnum Research Inc is currently a sole importer of IMI / IWI firearms in the USA).

"Barak" SP-21 pistol is not the best looking handgun, but it is definitely a practical and business-like pistol, available in most popular calibers: 9mm Luger, .40S&W and .45ACP. It is also flexible in functioning, because of double action trigger, separated ambidextrous safety which allowed for "cocked & locked" carry, and a separate decocker button, located at the top of the slide, just ahead of the rear sight. Additional "modern" features are polymer frame and accessory rail under the barrel. As a result, this gun is, at least for all practical purposes, a strong rival to such pistols as a Glock or Walther P99. However, it is still to be seen if this gun will succeed both in Israel or on international market.

The "Barak" SP-21 pistol is a short recoil operated, locked breech pistol. While the rounded shape of the slide can suggest the rotating barrel lockup, in fact the SP-21 features a Browning High Power type tilting barrel locking. The pistol is hammer fired, with true double action trigger, ambidextrous frame-mounted safety lever and separate slide-mounted decocker button (at the top of the slide). Civilian models, offered in USA, also feature an internal key lock as an additional safety feature. While the slide itself is made of steel, the rear part with cocking serrations and fixed rear sights, is made from polymer. The frame is also made from polymer. For improved accuracy and durability, the barrels on all SP-21 pistols have polygonal rifling. Front sight is dovetailed into the slide, rear sight is integral to the polymer slide "hump".