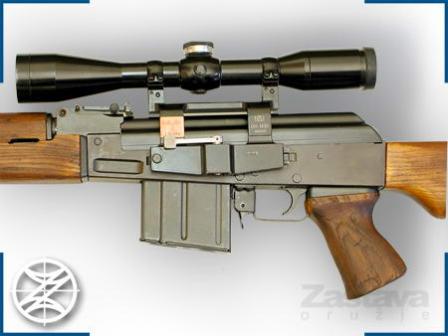 The M76 sniper rifle has been developed by late 1970s at the Crvena Zastava Arms factory, in former Yugoslavia. It is still offered by the successor of Crvena Zastava, the Zastava Arms factory in Serbia. The M76 is based on famous Kalashnikov AK action, stretched and strengthened to accept much longer and powerful rifle ammunition. The trigger also has been limited to semiautomatic fire only.All controls and layout of the rifle are similar to AK, and it is fitted with typical side-rail on the left wall of the receiver, which can accept mounts for day and night scopes. Standard sight is the 4X daylight telescope, and the M76 is fitted with adjustable open sights as a back-up measure. Long barrel is fitted with flash hider. While M76 is said to be effective up to 800 meters, it is more in line with so called "designated marksmen rifles" like Dragunov SVD, than with most of the western sniper rifles.

The M76 is a gas operated, semiautomatic weapon. Receiver of M76 is made from machined steel. The long stroke gas piston operates the rotating bolt with two lugs,which locks into the receiver. The Kalashnikov-type safety is located at the right side of the receiver. Furniture is made from wood.